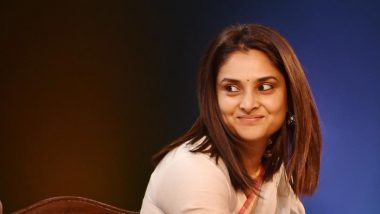 New Delhi, May 9: Divya Spandana aka Ramya, who heads the Social Media and Digital Communications wing of the Congress, on Thursday took on Prime Minister for accusing former prime minister Raji Gandhi of using INS Viraat for a vacation trip. In a tweet, Divya Spandana recalled an incident when "Canadian citizen" Akhsya Kumar and his family were invited onboard INS Sumitra as part of the International Fleet Review (IFR) at Visakhapatnam.

Here’s the link to the article, most of us have not forgotten this controversy : https://t.co/jrPNUvk2Py pic.twitter.com/SWkl78rA4F

Divya Spandana's tweet was in response to PM Narendra Modi's accusation that former Prime Minister Rajiv Gandhi had used aircraft carrier INS Viraat as "personal taxi" for a holiday. “Ever imagined that a premier warship of the Indian armed forces could be used as a taxi for a personal holiday? One dynasty did it,” Modi said. Divya Spandana Ramya, Congress IT Cell Chief, Booked for Sedition After Her 'Chor' Tweet Against PM Modi.

The prime minister claimed the Congress jeopardised the national security and Navy was made to host the Gandhi family and Rajiv Gandhi’s in-laws, and a helicopter was also deployed in their service. "INS Viraat was insulted by using it as a personal taxi. This happened when Rajiv Gandhi and his family was out for a 10-day vacation. INS Viraat was deployed for securing our maritime boundary. But it was diverted to take the Gandhi family which was out for a vacation," PM Modi claimed.

(The above story first appeared on LatestLY on May 09, 2019 08:26 PM IST. For more news and updates on politics, world, sports, entertainment and lifestyle, log on to our website latestly.com).