Karnataka Congress President DK Shivakumar on Friday alleged that his phone was being tapped. 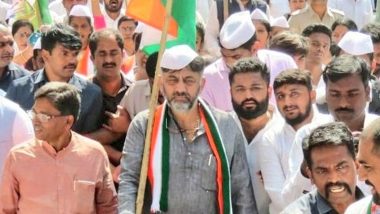 Bengaluru, August 21: Karnataka Congress President DK Shivakumar on Friday alleged that his phone was being tapped. In his letter to Bengaluru Police Commissioner Kamal Pant, DK Shivakumar said his conversations are being tapped and cops should investigate it. However, Karnataka Home Minister Basavaraj Bommai denied the allegation. DK Shivakumar, Karnataka Congress Chief, Appeals to Party Workers to Refrain From Making Defamatory Statements Against Any Political Leader on Matters of Health and Other Issues.

"My phone is being tapped for 100%," Shivakumar said. The Congress leader accused the BJP-led Karnataka government of tapping his phone calls. He also alleged that the state government was influencing the investigation in the Bengaluru riot case. State Home Minister Basavaraj Bommai rejected the allegation levelled by Shivakumar. 'Open Secret' That Congress Was Involved in Bengaluru Violence: Laxman Savadi.

Reacting to Shivakumar's statement, Karnataka Medical Education Minister K Sudhakar sought to know if the Congress leader was scared of the investigation. "The KPCC (Karnataka Pradesh Congress Committee) president has publicly attacked Bengaluru Police Commissioner Kamal Pant, who is conducting an honest investigation into the mischief of the violence case and called him a BJP agent. Why is DK Shivakumar so afraid of an honest investigation? This attempt is to protect whom?," Sudhakar said while speaking to ANI.

The violence broke out in parts of Bengaluru on August 11, over an alleged "derogatory" social media post. At least three people lost their lives and nearly 60 police personnel were injured during the incident. A total of 415 accused have so far been arrested in connection with the violence.

(The above story first appeared on LatestLY on Aug 21, 2020 06:53 PM IST. For more news and updates on politics, world, sports, entertainment and lifestyle, log on to our website latestly.com).