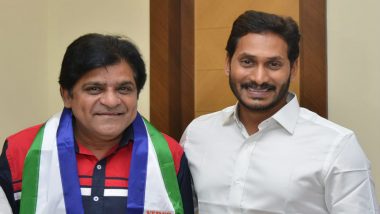 Ali, whose full name is Mohammad Ali Basha, told reporters that he would campaign for the party and would like to see Jaganmohan Reddy as the Chief Minister of Andhra Pradesh. Lok Sabha Elections 2019 Schedule: Voting In 7 Phases From April 11 to May 19, Counting And Results On May 23; Check All Dates For General Elections.

The actor said he has no immediate plans to contest elections but admitted he dreams of becoming a Minister. "Jaganmohan Reddy stands by his word and that is why I have joined YSR Congress," he said. Simultaneous elections to Andhra Pradesh Assembly and Lok Sabha are scheduled on April 11.

The 49-year-old actor, who hails from Rajahmundry in Andhra Pradesh, said he felt that he will not have a secure future in TDP.  "Friendship is different from politics," he remarked when asked about not joining his friend and well-known actor Pawan Kalyan's Jana Sena. Ali has acted in many films featuring Pawan Kalyan in the lead.

(The above story first appeared on LatestLY on Mar 11, 2019 01:41 PM IST. For more news and updates on politics, world, sports, entertainment and lifestyle, log on to our website latestly.com).