This has given the Opposition parties- Congress and JD(S), an opportunity to attack the BJP. MTB Nagaraj is no stranger to controversy and the legislator had abandoned the Congress-Janata Dal (S) coalition early this year. 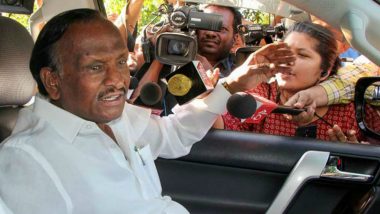 Bengaluru, November 18: The political atmosphere in the southern state of Karnataka, which will see by-polls in December 2019, has already soared. MTB Nagaraj, one of the rebel MLA's who recently joined the Bharatiya Janata Party (BJP), mentioned in his poll affidavit that his net worth went up by Rs 185 crores in the last 18 months alone. This has given the Opposition parties- Congress and JD(S), an opportunity to attack the BJP. MTB Nagaraj is no stranger to controversy and the legislator had abandoned the Congress-Janata Dal (S) coalition early this year. Karnataka Political Crisis: Rebel MLA Nagaraj Who Raised Coalition’s Hopes Flies to Mumbai.

However, the BJP denied that the rise in Nagaraj's fortune has anything to do him joining the BJP. The Bharatiya Janata Party (BJP) on Sunday, November 17, released a list of 40 leaders who will campaign for the party for the upcoming by-elections in the state of Karnataka. Karnataka State Election Commission had said last Sunday, on November 10, that the by-elections to 15 assembly seats will go as per schedule announced earlier. Karnataka By-Elections 2019: As BJP Bets on Disqualified MLAs, Resentment Grows. Karnataka's Disqualified MLA MTB Nagaraj Now Owns Rolls-Royce Phantom Worth Rs 9.5 Crore.

According to dates, bypolls will be held on December 5. The counting of votes will take place on December 9 and results will be declared on the same day. The model code of conduct comes into effect from November 11, said Chief Electoral Officer Sanjeev Kumar.

Stakes are high for the Bharatiya Janata Party (BJP) which has a wafer-thin majority in currently 208-member house. Prior to a floor test, which resulted in the collapse of the 14-month-old Congress-JD-S government in Karnataka in July, former Speaker Ramesh Kumar disqualified 14 rebel MLAs of the Congress and three of the Janata Dal (Secular). This reduced the assembly strength from 225 to 208.

(The above story first appeared on LatestLY on Nov 18, 2019 11:25 PM IST. For more news and updates on politics, world, sports, entertainment and lifestyle, log on to our website latestly.com).