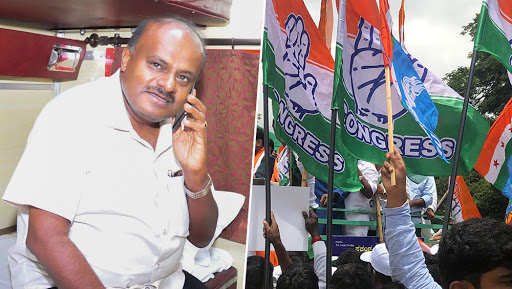 Bengaluru, July 10: The political chaos in Karnataka took major turns as two more lawmakers from the ruling JDS-Congress dispensation submitted their resignation to the speaker KR Ramesh Kumar on Wednesday. With this, the political turmoil has deepened as the ruling coalition declined to 103 members in the state Assembly and is on the verge of losing the government.

Considering the political drama at Mumbai hotel, where Karnataka Congress senior leader and minister DK Shivakumar wasn't allowed to meet the 13 rebel MLAs and had to drink coffee and eat momos alone outside, the political scenario is bound to become tense on Thursday. Even BJP leader creating chaos at Vidhana Soudha and met Governor Vajubhai Vala at Raj Bhavan to demanded to advise the Speaker to act immediately on the resignations. Karnataka Political Chaos: 2 More Lawmakers Resign, JDS-Congress Coalition Tally Declines to 103

Now with examining the political crisis in the state where both Congress and JDS are looking for options to save their government and rebel MLAs are behaving in an adamant manner, the heat in the political arena is definitely expected to rise. On one side, Kumaraswamy and Co. are considering reshuffle, the attempt to save the ruling dispensation looks bleak.

The only sigh of relief for the JDS-Congress government is that the Speaker held the resignations of nine out of 15 rebel MLAs and stated that they are not in order. He mentioned that only five were in the prescribed format and asked the MLAs to appear before him on July 12 and 15.

The strength of the Karnataka assembly is 224. The Congress and the JDS together have 118 members along with one BSP and one Independent member. The magic number is 113, excluding the Speaker who casts his vote only in the event of a tie. If the 15 resignations are accepted, it will bring the coalition's numbers down to 103 and the majority mark in the assembly from 113 to 106. The BJP, which has 105 legislators, reportedly wants to reduce the total strength of the assembly to 207 in order to claim a simple majority in the House.