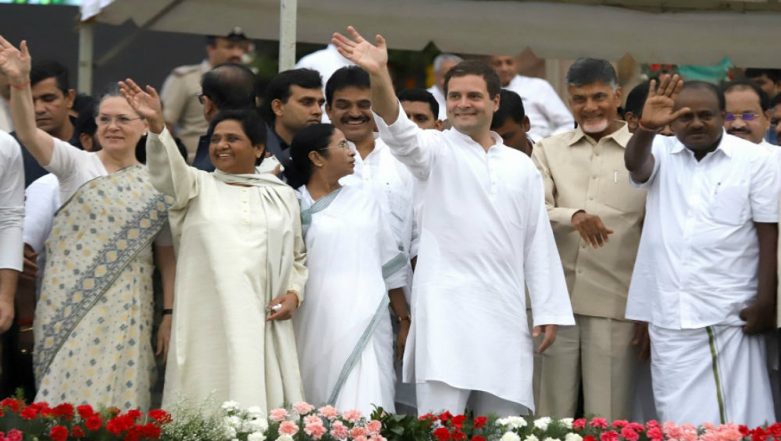 Chandrababu Naidu met Banjeree last week reportedly to invite her for the meeting. However, the Bengal leader told him that there was no need for any meeting before the results of Lok Sabha polls, NDTV reported. Mayawati has also turned down the invite. Akhilesh Yadav would follow her given the fact the two contested Lok Sabha elections in an alliance. According to reports, prime ministerial ambition is the main reason that is keeping Banerjee and Mayawati away. EC to Hold Meeting to Review Preparations For Counting of Votes Today.

Both Banerjee and Mayawati have given numerous hints at their prime ministerial ambitions. Last week, addressing a public meeting in Uttar Pradesh's Ambedkar Nagar Lok Sabha seat, Mayawati said she may have to contest from the constituency "if all goes well". "If all goes well, I may have to seek election from here because the road to national politics passes through Ambedkar Nagar," she told the gathering. Lok Sabha Election Results 2019: Election Commission to 1st Feed Result on suvidha.eci.gov.in, results.eci.gov.in Directly From Counting Centres.

This is not the first time that Mayawati had thrown her hat in ring for the prime ministerial post. In April, she said that she would use the experience she has gained as Uttar Pradesh chief minister to give the "best government" at the Centre "if we get an opportunity". Banerjee, on the other hand, has not spoken openly of her ambition for the top job. But she has been avoiding Congress and keeping her links with Telangana Chief Minister K Chandrashekar Rao, who is batting for a non-Congress, non-BJP front to rule at the Centre.