TMC supremo gave a report card for the BJP in the ongoing Lok Sabha Elections 2019 and in the report card, she predicted that BJP would end up with less than a hundred seats 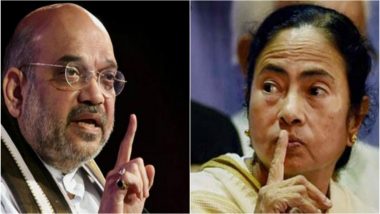 Kolkata, May 16: With the bitterness between West Bengal Chief Minister Mamata Banerjee and Prime Minister Narendra Modi increasing with each passing comment, TMC supremo on Thursday gave a report card for the BJP in the ongoing Lok Sabha Elections 2019. In her report card, she predicted that BJP would end up with less than a hundred seats.

Banerjee while predicting the BJP"s tally in the LS polls, said, "Andhra - Zero; Tamil Nadu - Zero; Maharashtra 20... 200 seats gone." Her remarks are considered to BJP chief Amit Shah's claims who has stated that BJP would cross 300-mark and form a government on its own, Along with this, BJP had even claimed o win 30 seats in West Bengal. PM Narendra Modi Invokes 'Jai Shri Ram' Chant at West Bengal Lok Sabha Rally, Accuses Mamata Banerjee of Making it a Crime in State.

With Election Commission curtailing the poll campaigning time for phase 7 in West Bengal, Banerjee had urgently edited her schedule last night. The TMC chief also asked the PM Modi to prove his allegation that Trinamool goons were behind the vandalism of Ishwar Chandra Vidyasagar's statue that had triggered the furore.

Earlier in the day, Banerjee had lambasted PM Modi and shouted 'Chowkidar Chor Hai' at her rally in Diamond Harbour. With this new attack, she reminded him of her party leaning towards the Congress ahead of the last leg of Lok Sabha Elections 2019. She even called him a "liar", and said, "Prove your allegations, otherwise we'll drag you to jail".

(The above story first appeared on LatestLY on May 16, 2019 06:55 PM IST. For more news and updates on politics, world, sports, entertainment and lifestyle, log on to our website latestly.com).