The term of Malegaon Municipal Corporation (MMC) in Maharashtra ended on June 13 and elections are due in the Muslim-dominated town. 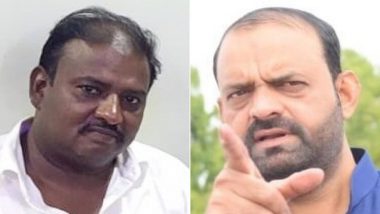 Malegaon, June 30: The term of Malegaon Municipal Corporation (MMC) in Maharashtra ended on June 13 and elections are due in the Muslim-dominated town. The main contest is between former legislator Shaikh Asif-led Nationalist Congress Party (NCP) and the Mahagathbandhan (grand alliance) of All India Majlis-e-Ittehadul Muslimeen (AIMIM), headed by cleric-turned-politician Mufti Mohammed Ismail, and Janata Dal Secular (JDS). The Shiv Sena also plays a significant role in the town’s polity. Since the municipal polls are around the corner, political circles are abuzz with questions such as - Will the NCP, Shiv Sena and Congress come together? Will the NCP and Congress contest polls together?

During the last civic polls, held in May 2017, Congress had emerged as the single largest party by winning 28 seats and come to power jointly with Shiv Sena which had won 13 seats. At that time, Shaikh Asif was heading the Congress and the NCP had Mufti Mohammed Ismail as its leader. The NCP and JDS had formed a grand alliance (Mahagathbandhan) to contest the election and won 26 seats. The Bharatiya Janata Party (BJP) had bagged 9 seats. The AIMIM, headed by the politically influential Yunus Isa family, had won 7 seats. But the political equation has changed in Malegaon since then. Maharashtra CM Eknath Shinde Says ‘People Will Know if I Visit Matoshree’.

In 2019, Mufti Mohammed Ismail joined the AIMIM along with over 20 party corporators. He also won the assembly election on AIMIM’s ticket. The JDS and Yunus Isa family had campaigned for him. Similarly, Shaikh Asif quit Congress this year and joined the NCP. He was followed by 28 Congress corporators who quit the grand old party and joined the NCP. Therefore, now the main political contest is between the NCP and the Mahagathbandhan of AIMIM and JDS, with the Shiv Sena playing a crucial role, possibly of a kingmaker, in the formation of power.

In Malegaon Central, currently, the main political forces include the NCP, AIMIM, JDS and Congress. The Shiv Sena and BJP are dominant in the Outer part. Since Muslims are the largest part of the electorates in the municipal polls, parties like Congress, NCP and JDS avoid any type of pre-poll arrangement with the Shiv Sena and BJP, seen as communal by the Muslim community. However, both Mufti Mohammed Ismail and Shaikh Asif had in past joined hands with the Shiv Sena after the elections to rule the municipal corporation. Hence, the possibility of the NCP and Shiv Sena or Mufti Mohammed Ismail and the Shiv Sena coming together post the elections cannot be ruled out. But can there be a pre-poll alliance between the NCP, Shiv Sena and Congress or the NCP and Congress or the NCP and Shiv Sena? To get the answer to this politically important question, we spoke to their leaders in Malegaon.

Speaking to the author, Malegaon NCP President Shaikh Asif ruled out a pre-poll alliance with any party for corporation elections in Malegaon. “We have decided to contest polls on our own. We will not form any pre-poll alliance. The state leadership has given its nod to our decision and we will field candidates in all 32 wards. We are trying to win the majority without the support of any other party,” Shaikh Asif said. Asked with which party they would be comfortable forming an alliance in case the NCP falls short of the majority, he said: “We will talk to secular parties. But first, we will try to bring independent corporators (if there any) into our fold.”

Asked about the possibility of a tie-up with NCP or any other party, newly-appointed Malegaon Congress President Ejaz Beg said it was too early to say anything. “We have not discussed this issue so far. Whatever the state leadership will decide, we will follow it,” Ejaz Beg said. “I am meeting party workers and leaders daily and receiving their feedback and views on various issues. Once the schedule of election is declared, we will announce whether we contest in an alliance or alone,” he added.

The author tried to reach out to a couple of Shiv Sena functionaries in Malegaon. But some of them did not respond and others refused to speak given the current turmoil within the Shiv Sena. The Malegaon Municipal Corporation on June 8 published the draft ward delimitation with permission from the State Election Commission. The final draft will be declared on July 6. The Malegaon Municipal Corporation elections will be held on one ward-three member basis. Three corporators will be elected from every ward, except for one ward where two corporators will be elected. Accordingly, the strength of the house will increase from 84 to 95.

(The above story first appeared on LatestLY on Jul 01, 2022 12:33 PM IST. For more news and updates on politics, world, sports, entertainment and lifestyle, log on to our website latestly.com).