Ousted Dravida Munnetra Kazhagam (DMK) leader MK Alagiri on Tuesday broke his silence on reports that he is likely to join the Bahratiya Janata Party (BJP). 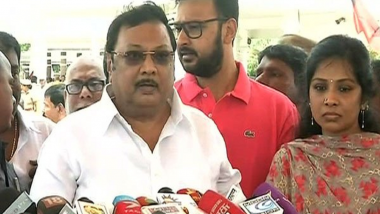 Chennai, November 17: Ousted Dravida Munnetra Kazhagam (DMK) leader MK Alagiri on Tuesday broke his silence on reports that he is likely to join the Bahratiya Janata Party (BJP). Earlier today, Tamil Nadu BJP chief L Murugan said his party is ready to welcome MK Alagiri. There are reports that Alagiri is mulling the idea of launching a political party ahead of the assembly elections due in May, 2021. 'MK Stalin is More Dangerous Virus Than Coronavirus', Says DMK Leader Premalatha Vijayakanth.

Reacting to reports of him joining the BJP, Alagiri said: "I'm happy he (Tamil Nadu BJP chief L Murugan) said so. But I have not decided anything yet. I will decide my political stand after discussion with supporters." Union Home Minister and senior BJP leader Amit Shah is scheduled to visit Tamil Nadu on November 21. There are reports that Alagiri may discuss his future course of action with Shah. 'Vetri Val Yatra' by Tamil Nadu BJP Chief Causes Traffic Jam in Chennai, Ambulance Gets Stuck for Half-An Hour (Watch Video).

However, Alagiri rejected these reports. "There is no political strategy meet on 21, it's all rumours," he was quoted by news agency ANI as saying. The rivalry between Alagiri and MK Stalin, both sons of late DMK patriarch M Karunanidhi, had resulted in the expulsion of the former in 2016. And Alagiri's absence only cemented Stalin's position who is now the president of the DMK.

According to a report by NDTV, Alagiri could launch his own political party. "I am holding talks with my supporters. We are discussing if we have to launch our own party or should we just declare our support to a party," Alagiri was quoted as saying.

(The above story first appeared on LatestLY on Nov 17, 2020 03:11 PM IST. For more news and updates on politics, world, sports, entertainment and lifestyle, log on to our website latestly.com).