Jammu and Kashmir Reservation Amendment Bill, proposing reservation for economically weaker section residing near the Actual Line of Control area was passed in Lok Sabha during the Monsoon Session 2019. 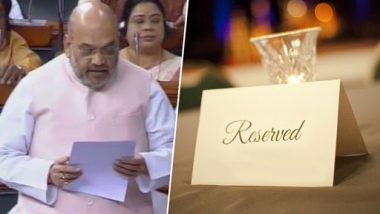 New Delhi, June 28: After a heated discussion in the ongoing Monsoon Session of the Parliament, the Union government managed to pass Jammu and Kashmir Reservation (Amendment) Bill, 2019,  in Lok Sabha on Friday. The Bill was introduced by Union Home Minister Amit Shah in Lok Sabha on Friday itself. Though the Amendment Bill needs to get a two-thirds majority, the passing of the Amendment Bill in Lower House of Parliament is amongst the first ones that the ruling dispensation was looking for a longer time.

The Amendment Bill is aimed at replacing the ordinance to provide 10 percent reservation for economically weaker sections in the state of Jammu and Kashmir. Amit Shah in Lok Sabha: 'Jawaharlal Nehru Responsible For Jammu & Kashmir Conflict...Congress Even Lacked Will to Ban Jamaat-e-Islami'

According to the new Bill, amendments in the Jammu and Kashmir Reservation Act, 2004 is being mulled where reservation in educational institutions and government jobs to people living within 10 kilometres of the International Border in Jammu is proposed. This would bring the people living along the border areas within the ambit of reservation at par with people living near the Actual Line of Control area.

Along with this, the Bill proposes to provide state government jobs to the youth of Jammu and Kashmir - under reserved category - for economically weaker sections belonging to any religion or caste. Earlier, the Union Cabinet on February 28, 2019, had approved 'The Jammu and Kashmir Reservation (Amendment) Ordinance, 2019' and consequently cleared by President Ram Nath Kovind.

The Bill proposes to give reservation in educational institutions and government jobs to people living within 10 kilometres of the International Border in Jammu. The Bill will replace the Ordinance promulgated in this regard.

(The above story first appeared on LatestLY on Jun 28, 2019 04:44 PM IST. For more news and updates on politics, world, sports, entertainment and lifestyle, log on to our website latestly.com).