Year-Ender 2019 on Motormouth Politicians: From Pragya Thakur to Azam Khan, List of 5 Indian Netas Who Sparked Controversies With Their Remarks

In the year 2019, politicians from major political came out in open and sparked row due to their motormouthedness. Here's top five controversial comments of politicians which created a furore among the people. 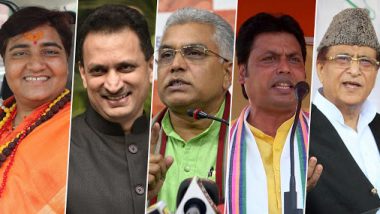 The year 2019 was not just interesting, but also saw some political controversies that were ignited due to some irrelevant and unnecessary comments by motormouth politicians. Though there have been numerous such incidents in the past, politicians from major political parties came out in open and sparked row due to their motormouths. Be it Sadhvi Pragya Thakur or the infamous Ananthkumar Hegde and Dilip Ghosh to Azam Khan, their outspokenness and outlandish comments made people think if they made correct decisions on choosing them as their leaders.

The list of such motormouth politicians in 2019 is huge and goes on and on, however, we have chosen five who sparked controversies. Take a look at a few controversial comments of politicians which created a furore among the people. Azam Khan's 'Khaki Underwear' Jibe at Jaya Prada Further Lowers Discourse in Lok Sabha Elections 2019.

The BJP MP, representing Bhopal Lok Sabha constituency, had hailed murderer of Mahatma Gandhi -- Nathuram Godse -- and called him a patriot. Following this, PM Narendra Modi stated that he will never be able to forgive her.

Here's what she had said:

Nathuram Godse was a 'deshbhakt' (patriot), he is and will remain a 'deshbhakt'. Those calling him a terrorist should instead look at themselves. They will be given a befitting reply in this election.

Another BJP MP, representing Uttar Kannada Lok Sabha constituency, sparked a row when he made unparliamentary comments against Rahul Gandhi, calling him a 'paradesi (foreigner) born to a Muslim and a Christian.'

Here's what he said:

Look at the pitiful situation they (Congress) have brought us to. The whole world is praising our soldiers for their courage and bravery and this man (referring to Rahul Gandhi) wants proof of the damage caused in the attack (the Balakot airstrike). How did the son of a Muslim become a Brahmin named Gandhi? This 'paradesi' (referring to Rahul Gandhi) was born to a Muslim and a Christian. How does he become a Brahmin? Can he provide DNA proof?

Our desi (Indian) cows have a special characteristic. There is gold mixed in their milk and that is why their milk is golden. There is a blood vessel that helps produce gold with the help of sunlight. So, we have to keep those cows. If we drink desi cow milk, we will become healthy and can prevent diseases.

The Chief Minister of Tripura is another person who had previously, too, sparked a controversy with his comments when he said that his father and relatives came from Bangladesh and if NRC is implemented in Tripura, he would be among those affected by it, by losing his CM’s chair.

If I implement it in my state…….My relatives, my father came from Bangladesh. He has got his citizenship card…After that, I was born in Tripura. So, if anyone suffers a loss due to NRC, I shall lose my Chief Ministership first. Am I a fool that I shall implement NRC to lose CM-ship?

and the last one:

Samajwadi Party from Rampur is among those politicians who had been in news ever since they entered politics. During the Lok Sabha Elections 2019 campaign, Khan took a derogatory jibe at former party member-turned-BJP leader Jaya Prada, which was aimed at leveling the "communal" tag on the actor-politician.

I brought her (Jaya Prada) to Rampur. You are a witness that I did not allow anyone to touch her body. It took you 17 years to identify her real face but I got to know in 17 days that she wears khaki underwear.

There are innumerable comments that would make people think on their decisions which they took in 2019 Lok Sabha elections. We hope that the year 2020 brings some sense into politicos and the list goes smaller.

(The above story first appeared on LatestLY on Dec 30, 2019 05:02 PM IST. For more news and updates on politics, world, sports, entertainment and lifestyle, log on to our website latestly.com).