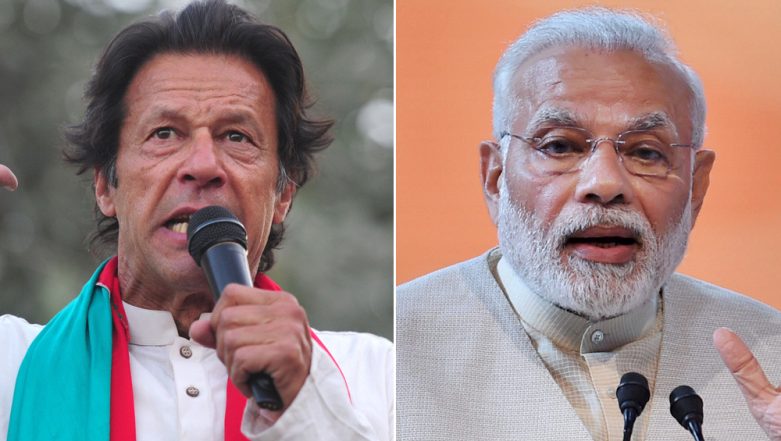 New Delhi, May 26: Prime Minister Narendra Modi held a telephonic conversation with his Pakistani counterpart Imran Khan on Sunday, during which he called for creating trust and an environment free of violence and terrorism for fostering peace and prosperity in the region.

The Ministry of External Affairs (MEA) said it was Khan who called up Modi. "The Prime Minister thanked the Prime Minister of Pakistan for his telephone call and greetings," it said. Recalling his initiatives in line with his government's "neighbourhood first" policy, Modi referred to his earlier suggestion to Khan to fight poverty jointly, the MEA said. Imran Khan Speaks to PM Narendra Modi, Expresses Desire to Work Together: FO.

"He stressed that creating trust and an environment free of violence and terrorism were essential for fostering cooperation for peace, progress and prosperity in our region," it added.

It said Modi also received telephone calls from former president of the Maldives Mohamed Nasheed and former prime minister of Nepal Madhav Nepal on his victory in the recent general election.

"Former president Nasheed congratulated the Prime Minister on the historic mandate and noted that the relationship between the Maldives and India had deepened in recent times," the MEA said. He stressed the importance of close cooperation to fight the forces of extremism and radicalisation in the region, it added.

On his part, Modi thanked Nasheed for his felicitation and reiterated his commitment to continue fostering a strong, mutually beneficial and all-round partnership between the two countries.

The MEA said Madhav Nepal warmly congratulated Modi on leading his party and alliance to a grand, historic and landslide victory. He also expressed the confidence that India's emergence as a front-ranking world power would qualitatively uplift the entire region.