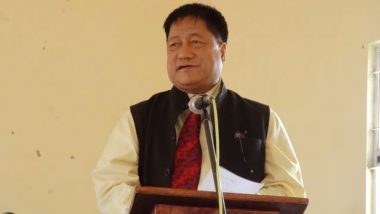 Aizawl, April 24: Former Congress MLA PC Zoramsangliana died on Saturday due to COVID-19. He was 65 years of age. Zoramsangliana breathed his last at 5:20 pm at Zoram Medical College. Political leaders cutting across party lines expressed condolences on the demise on the demise of the former Congress legislator. The Congress leader was tested positive for coronavirus on April 14, and on the same day, he was admitted to the hospital.

Mizoram Chief Minister Zoramthanga and other political leaders, including Mahil Congress president Sushmita Dev and Lhingkim H Shingnaisui Kim expressed grief over the demise of Zoram Sanglania. Notably, the former Congress MLA was admitted to the hospital after he showed symptoms of the virus.

It is with deep sorrow that we have to bid farewell to Mr. PC Zoram Sangliana, Ex-Minister, another victim of COVID-19, which is currently plaguing our world.

My sincere condolences to his bereaved family, and pray the Almighty comforts them during these hard times. pic.twitter.com/gCP8qkTJYr

My deepest condolences to his family.

PC Zoram Sangliana ji was a senior leader who was a strong pillar of @INCIndia in Mizoram. Praying that his soul rests in peace. https://t.co/tduKTws4gH

My thoughts and prayers are with his family, friends and followers.

We are deeply saddened by the demise of Shri PC Zoram Sangliana. A true Congressman & dedicated leader of the people. Our thoughts and prayers are with his family in this time of grief. pic.twitter.com/Llz2Aw8Dmd

The former Kolasib MLA also suffered from diabetes, chronic bronchitis and high blood pressure. Zoram Sanglania won the Kolasib seat by a margin of 595 votes in 2013. He was also former Art and Culture Minister of Mizoram.

(The above story first appeared on LatestLY on Apr 24, 2021 10:01 PM IST. For more news and updates on politics, world, sports, entertainment and lifestyle, log on to our website latestly.com).