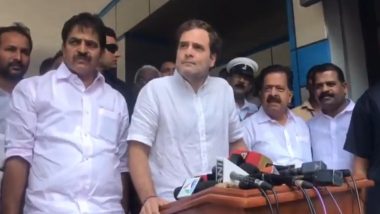 Wayanad, October 4: Congress MP Rahul Gandhi on Friday hit out at the BJP-led NDA government over the economic slowdown in the country and said that Prime Minister Narendra Modi should discuss rising unemployment. Rahul Gandhi, who arrived in his parliamentary constituency Wayanad, said that PM Narendra Modi must answer the country that why he has created "massive joblessness". Rahul Gandhi Writes Letter to Kerala CM Pinarayi Vijayan, Asks Him to Ensure Financial Assistance For Flood Victims.

"India's biggest strength was its economy which has been destroyed by Narendra Modi and the Bharatiya Janata Party (BJP). He should answer why he did so, why has he created massive joblessness in the country? That is the discussion Narendra Modi needs to have," the former Congress chief said. He arrived in Wayanad to show solidarity with the protesters opposing night traffic ban on the national highway passing through Bandipur Tiger Reserve in Kerala. Kerala Floods: Rahul Gandhi Writes Letter to Union Ministers, Seeks Help For Rehabilitation Work in Wayanad.

Gandhi visited the protest site in Sulthan Bathery and spent 45 minutes with the agitators. While addressing them, he assured them of engaging the country's top lawyers to fight the case in Supreme Court. "Now this is in the Supreme Court. I have also spoken to our legal experts and have asked for help. I assure all of you that the best legal resources in the country would be employed," he told the protestors.

I met with members of the press in Wayanad, earlier today. I’m attaching a short video with highlights of that interaction. pic.twitter.com/MA9aDNB93V

Gandhi had discussed the matter with Kerala Chief Minister Pinarayi Vijayan at the Kerala House in Delhi on Tuesday. The night traffic ban was introduced following a directive from the Mysuru Deputy Commissioner in 2009 to provide wild animals a reprieve from the vehicular movement. It was challenged in the High Court of Karnataka, but the decision was upheld and the matter is now being heard in the Supreme Court.

(The above story first appeared on LatestLY on Oct 04, 2019 02:13 PM IST. For more news and updates on politics, world, sports, entertainment and lifestyle, log on to our website latestly.com).