The Congress government in Rajasthan on Wednesday sent another proposal to Governor Kalraj Mishra, seeking to convene assembly session. 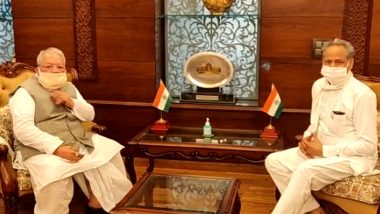 The demand for assembly session comes as the Gehlot government is considering showing its majority, following the rebellion by a section of party MLAs led by sacked Deputy Chief Minister Sachin Pilot. The Congress government holds a wafer-thin majority in the 200-member House reportedly with support from 102 legislators. The majority mark in 101. The opposition has 97 members, including 19 from the Pilot camp and 72 of the BJP. Rajasthan Governor Kalraj Mishra Cancels Independence Day ‘At Home’ Event Due to COVID-19 Situation in State.

"We have again sent a proposal to Governor Kalraj Mishra seeking to convene assembly session. We hope that the Governor will accept the proposal this time and announce the date to begin the session soon," state minister Pratap Khachariyawas told reporters. Earlier today, CM Gehlot met Mishra at Raj Bhavan after the latter returned a state government proposal to call a special assembly session, for the third time.

Later, the Governor asked the Congress government to consider a 21-day notice before convening assembly session and plan for social distancing during proceedings of the House, and submit a fresh proposal seeking to convene assembly session. Mishra also listed down certain conditions that, according to him, need to be followed if a floor test is conducted during the assembly session. The Congress government is facing a political crisis after Sachin Pilot along with 18 legislators revolted against the party.

(The above story first appeared on LatestLY on Jul 29, 2020 08:24 PM IST. For more news and updates on politics, world, sports, entertainment and lifestyle, log on to our website latestly.com).