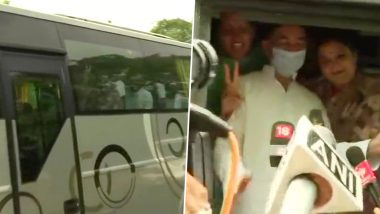 Congress MLAs being taken in bus to a resort outside Jaipur | (Photo Credits: ANI)

Jaipur, July 13: The Congress MLAs in Rajasthan who attended the legislative party meeting called by Chief Minister Ashok Gehlot were taken to a resort outside Jaipur. Gehlot, who is in an intense power tussle with Deputy CM Sachin Pilot, travelled along the legislators in the buses which were taken to Hotel Fairmont, located on outskirts of the state capital. Sachin Pilot's Posters Back at Congress Headquarters After Party Says 'Doors Open For All'.

The purpose behind keeping the MLAs together is to prevent defection, said a Congress insider. The strategy to keep the entire flock together is often enacted by political parties amidst fears of horse-trading.

Till the midnight, Deputy CM Sachin Pilot - at centre of the political crisis - claimed support of 30 MLAs and few independents. However, several legislators on his side returned to the Gehlot camp by today.

Reports claimed that only 10-12 MLAs, including a number of independents, are still siding with Pilot in his tussle with Gehlot. The party high command has also sent feelers to Pilot, asking the him to end his mutiny and reconcile the differences with the CM.

#Rajasthan : Buses, carrying MLAs, leave from the residence of Chief Minister Ashok Gehlot after the Congress Legislative Party (CLP) meeting concluded. One of the MLAs says, "All is well." pic.twitter.com/shZGBXlHQN

While the Gehlot camp has claimed that 107 MLAs attended the meeting, sources close to Pilot told reporters that the party is concealing the actual numbers and only 93-94 legislators turned up for the meeting held today.

After the meeting concluded, a resolution was passed by the Congress Legislative Party (CLP), blaming the Bharatiya Janata Party (BJP) for the crisis which has erupted in the state.

"This ripping off of democracy by BJP is insult to 8 crore people of Rajasthan, they'll not accept it. CLP meet expresses its confidence in Congress president Sonia Gandhi and leader Rahul Gandhi, and unanimously supports the government led by Ashok Gehlot," the resolution stated.

(The above story first appeared on LatestLY on Jul 13, 2020 03:48 PM IST. For more news and updates on politics, world, sports, entertainment and lifestyle, log on to our website latestly.com).