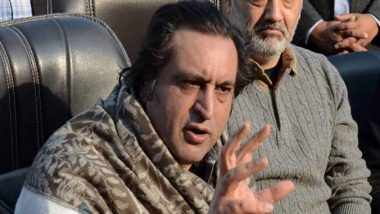 Srinagar, July 31: People's Conference (PC) chief Sajjad Lone was released from house arrest on Friday, a day before Eid Al-Adha will be celebrated in Jammu & Kashmir. The former separatist-turned-mainstream politician was detained last year, on August 5, shortly before the Union Parliament abrogated Article 370 that guaranteed special status to Jammu & Kashmir.

His release comes nearly a year after he was detained. In February, Lone along with a few politicians in the Valley were released from the government accomodation and ordained to remain under house arrest. Omar Abdullah Says 'Won't Contest Assembly Elections Till Jammu And Kashmir Remains Union Territory'.

After his home detention ended, Lone took to Twitter to announce that he would be sharing his views in the days to come. The period of detention, he said, was "psychologically draining".

"Finally 5 days short of a year I have been officially informed that I am a free man. So much has changed. So have I. Jail was not a new experience. Earlier ones were harsh with usual doses of physical torture. But this was psychologically draining. Much to share hopefully soon," Lone tweeted.

Lone, who formed the People's Conference in 2014, was considered in the Valley as a tacit ally of the Bharatiya Janata Party (BJP). Speculations were abuzz that that BJP was considering to form an alliance with Lone to form a government after the split with former J&K CM Mehbooba Mufti's People's Democratic Party (PDP).

Lone's bonhomie with the BJP began just before the 2014 assembly elections in J&K, when he met Prime Minister Narendra Modi. In the BJP-PDP government, he was appointed as a Minister from the BJP's quota.

However, Lone had marked his protest against the plans to abrogate Article 370. On August 4, he was part of the Gupkar declaration signed by most J&K mainstream parties against the repeal of Article 370. Hours after the declaration was signed, he along with most other politicians of the Valley were taken into custody.

(The above story first appeared on LatestLY on Jul 31, 2020 02:24 PM IST. For more news and updates on politics, world, sports, entertainment and lifestyle, log on to our website latestly.com).