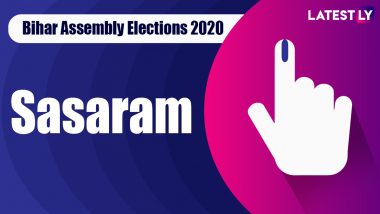 Bihar, October 21: Sasaram Vidhan Sabha seat is situated in Rohtas district in Bihar. Sasaram comprises community blocks of Sasaram and Tilouthu. Voting for the Sasaram election took place on November 3 in the first phase of Bihar Assembly Elections 2020. Counting of votes for the Bihar Polls was held on November 10 and the results were also declared on the same day. The seat was won by RJD's Rajesh Kumar Gupta in Bihar Assembly Elections 2020.

In the 2015 Bihar Assembly election, the Sasaram constituency was won by Ashok Kumar of RJD, and Jawahar Prasad of BJP was the runner-up.

According to the IANS-C Voter survey, the ruling JD(U)-BJP combine or the NDA is expected to return to power in Bihar. The similar projection has been made by some other surveys.

(The above story first appeared on LatestLY on Nov 10, 2020 09:37 PM IST. For more news and updates on politics, world, sports, entertainment and lifestyle, log on to our website latestly.com).