Siddaramaiah Issues Another Notice to 4 MLAs for Skipping Party Meeting 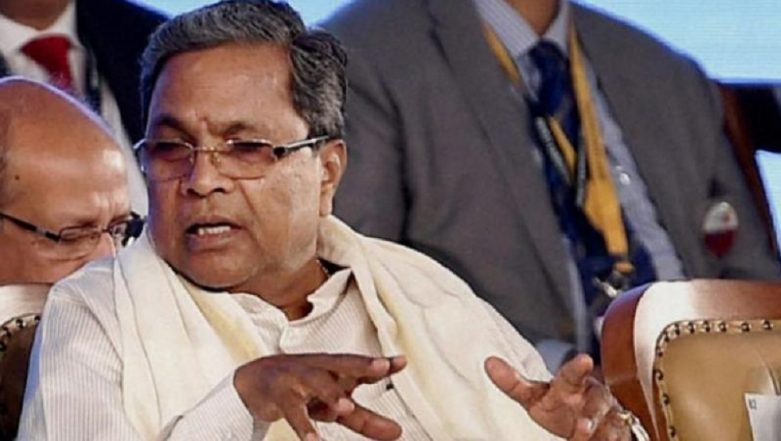 Bengaluru, February 6:  Former Karnataka chief minister and Congress leader Siddaramaiah has issued another notice to four dissenting party MLAs seeking an explanation before or after the Assembly Session. Last month, Siddaramaiah had served notices to the four legislators who did not turn up at a Congress legislature party meeting in Bengaluru.

Speaking to the media at that time, Siddaramaiah said, "The situation is not like it is being portrayed in the media. Notice has been served to all four MLAs (Ramesh Jarakiholi, Mahesh Kamatihalli, B Nagendra and Umesh Jadhav). Karnataka 'Operation Lotus': Siddaramaiah Says 'No Attempt' by BJP to Poach MLAs, CM H D Kumaraswamy Differs.

There is no problem to the government.”Siddaramaiah also said three of the MLAs had responded to the notice with the exception of Umesh Jadhav, the MLA from Chincholi who has not replied yet.

The four Karnataka Congress MLAs on January 18 abstained from the CLP meeting, which decided to move rest of the 76 legislators to a resort. The meeting was convened by the party to assess whether its flock was intact amid speculation that some of the party MLAs had switched over to the BJP. Siddaramaiah Loses Cool at Mysuru Event, Yells at Woman, Pulls Mic From Her: Watch Video.

The Congress, which shares power with JD-S, has 80 MLAs in the 224-member Assembly, including the Speaker. Accordingly, 79 MLAs were expected to attend the CLP meeting held under the supervision of central leaders K C Venugopal and Mallikarjun Kharge.