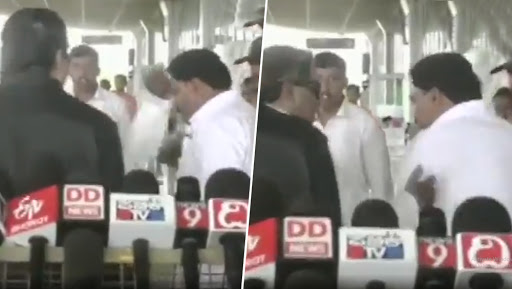 Karnataka, September 4: Former Chief Minister of Karnataka Siddaramaiah has once again stoked a major controversy after he lost his cool outside Mysuru Airport and slapped one of his party workers, according to ANI. This is not the first time that Siddaramaiah has been caught for his high handedness and misbehaving with people around him.  Siddaramaiah Loses Cool at Mysuru Event, Yells at Woman, Pulls Mic From Her: Watch Video.

At an event earlier this year, Siddaramaiah's unruly behaviour came to the light, when he engaged in a wordy duel with a woman and snatched the microphone from her, dislodging her dupatta in the process at an event in Varuna in Mysuru. The incident which occurred during a public interaction organised by Siddaramaiah, his MLA son Yathindra who represents Varuna assembly constituency, and others, were caught on camera with the video of it going viral.

On August 31, Siddaramaiah made another controversial remark, where he compared Janata Dal-United (Secular) workers to prostitutes. Reportedly, a reporter had asked the former chief minister his reaction to JDS workers blaming him for the collapse of the JDS-Congress government. He retorted using a slightly changed version of a Kannada proverb, "A prostitute who can't dance says the floor isn't right to dance."

Siddaramaiah made the remark while the president of the Women's Wing of Karnataka Pradesh Congress Committee (KPCC) Pushpa B Amarnath was present. The original proverb does not use the word prostitute’ but goes by A person who cannot dance blames the bad floor.’