Smriti Irani Details Her Visits to Amethi In Response to Congress' 'Missing Posters' Attack, Hits Back At Sonia Gandhi 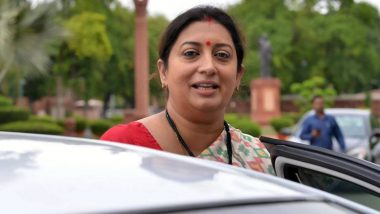 New Delhi, June 1: After missing posters of Smriti Irani surfaced in Uttar Pradesh’s Amethi district on Monday, Bharatiya Janata Party (BJP) MP in a series of tweets gave a detailed account of her visits to her Lok Sabha constituency. Replying to All India Mahila Congress, which took a dig at Irani by sharing the poster on its Twitter handle, the BJP MP said that she had an account of eight months. Twitter Antakshari Started by Smriti Irani as People Stay Indoors For Janata Curfew Amid Coronavirus Outbreak; Here's How Netizens Are Joining in With Songs.

In of her tweets, Irani said, “I have an account of 8 months, 10 times and 14 days.” Taking a dig at Sonia Gandhi, she added that how many time the Congress president had visited her constituency, Rae Barelli. The 44-year-old BJP MP also gave a detailed account of the work she had done in Amethi during the coronavirus lockdown. She tweeted, “Till now, 22,150 people by bus and 8,322 people by train have reached the district with proper legal formalities. I can tell the name of each and every member of families who returned homes. Can Sonia Gandhi give the account for Rae Bareli?”

Targeting the Congress, Irani said that the coronavirus was first reported in Amethi after leaders broke lockdown rules. In a tweet, she said, “You want me to break the law and encourage people to come out of their houses so that you can play 'Twitter Twitter’. You don't love Amethi, but I do. Stop playing with people's lives.” Union Minister Smriti Irani Lauds Sonu Sood For His Act of Kindness As He Continues to Help Migrant Workers Amid COVID-19 Crisis (View Tweet).

The image of the missing poster of Irani was shared by the All India Mahila Congress on its Twitter handle. The poster read, “After becoming MP from Amethi, Smriti Irani registered her presence in just a few hours. Today, when Amethi's citizens are frightened and distressed due to the COVID-19 pandemic, we are not saying you are missing as we have seen you playing Antakshari through Twitter, we have seen you giving lunch to a few people.”

(The above story first appeared on LatestLY on Jun 01, 2020 11:21 PM IST. For more news and updates on politics, world, sports, entertainment and lifestyle, log on to our website latestly.com).