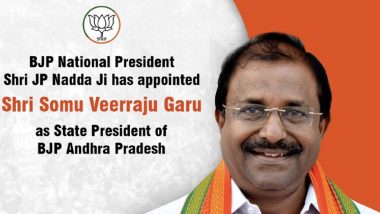 New Delhi, July 27: The BJP on Monday appointed Somu Veerraju, a MLC in Andhra Pradesh, as its state president, a party statement said. Veerraju, a senior BJP leader in the state, replaces Kanna Lakshminarayana, who was at the helm for over two years.

Despite the BJP making impressive strides in the neighbouring Telangana in the 2019 Lok Sabha polls, the party has remained a marginal force in Andhra Pradesh. Rajeev Bindal, Himachal Pradesh BJP President, Resigns Over Health Department Scam.

The appointment of a new president indicates the party's national leadership's push to rejig the organisation in the state to make it a force in the politics dominated by two regional parties, the YSR Congress and the TDP.