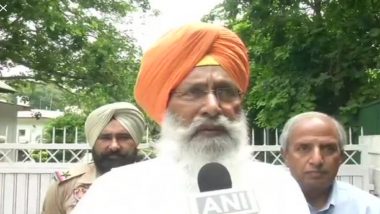 Dhindsa followed the footsteps of Shiromani Akali Dal (SAD) patron Parkash Singh Badal who also returned his Padma Vibhushan award in protest against "the betrayal of the farmers by the government". In a missive to President Ram Nath Kovind, Parkash Singh Badal said he was returning the award due to "the shocking indifference and contempt with which the government was treating the ongoing peaceful and democratic agitation of the farmers against the three farm Acts".

The former Punjab Chief Minister had received the country's second-highest civilian honour in 2015. "When the government of India had brought the ordinances, assurances were given that the farmers' apprehensions on these legislations would be addressed to their satisfaction while bringing the relevant Bills and subsequently the Acts," he said in his letter. Farmers' Protest: Farm Unions Reject Centre's Offer to Form Committee For Discussion Over Farm Laws.

Harsimrat Kaur Badal, the Shiromani Akali Dal's lone minister in the Narendra Modi government, had resigned from the Union Cabinet, hours ahead of voting in the Lower House on the two earlier Bills on September 17.

(The above story first appeared on LatestLY on Dec 03, 2020 03:36 PM IST. For more news and updates on politics, world, sports, entertainment and lifestyle, log on to our website latestly.com).