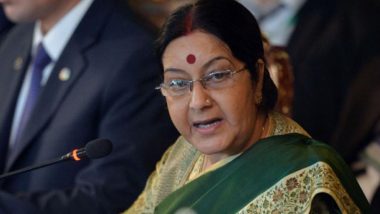 New Delhi, August 6: Sushma Swaraj, one of the tallest leaders of the Bharatiya Janata Party (BJP), died on this day exactly a year ago. Her demise came as a shock to the entire nation as she was active till days before suffering from the fatal cardiac arrest. To this date, Swaraj is considered as one of the most articulative leaders who entered the realm of Indian politics. Raksha Bandhan 2020: Vice President M Venkaiah Naidu Misses Sushma Swaraj on Rakhi, Shares Beautiful Picture.

Swaraj's rhetoric, though marked with grace and eloquence, was equally scathing against her political opponents. As the Minister for External Affairs (MEA), she successfully represented India and put forth the country's stand on geopolitical issues at various forums including the UN General Assembly. On her death anniversary, LatestLY remembers five of her powerful speeches.

Speech on Creation of Telangana

Swaraj's death came barely three months after she retired from active politics. In the first tenure of government headed by Prime Minister Narendra Modi, she served as the Foreign Minister for a complete five-year term. After the BJP's re-election in the 2019 general elections, she decided not to rejoin the government due to her health-related ailments.

(The above story first appeared on LatestLY on Aug 06, 2020 07:59 AM IST. For more news and updates on politics, world, sports, entertainment and lifestyle, log on to our website latestly.com).