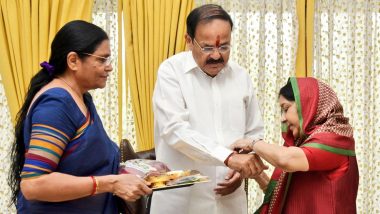 Sushma Swaraj was a Rajya Sabha member for three terms. She was also elected to Lok Sabha four times. Swaraj passed away in August last year, nearly week ahead of Rakhi festival.

Last year, while paying tributes to former EAM in Rajya Sabha, the VP said that she was a sister and "this year I will be missing this honour". She was a popular leader across party lines and was known for responding quickly to people who reach out to her for help on social media.

(The above story first appeared on LatestLY on Aug 03, 2020 05:19 PM IST. For more news and updates on politics, world, sports, entertainment and lifestyle, log on to our website latestly.com).