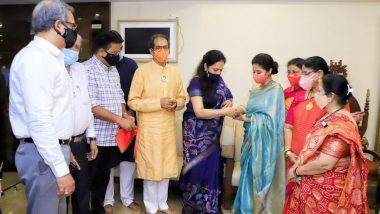 Last year, in September, just before the state Assembly polls, Matondkar distanced herself from the Congress citing “petty in-house politics” and said it defeated the “bigger goal” for the party’s city unit. Urmila Matondkar Resigns From Congress Party, Cites 'In-Fighting' in Mumbai Unit as Reason For Quitting.

This will be Matondkar's second party after she left the Congress in a huff on September 10 last year, post-defeat in the 2019 Lok Sabha elections at the hands of Bharatiya Janata Party's Gopal Shetty in Mumbai North constituency.

Infact, from September 2019 till November 30 evening, Matondkar, 46, had categorically denied that she was planning to join the Shiv Sena, though strong speculation reigned in political and media circles.

(The above story first appeared on LatestLY on Dec 01, 2020 02:02 PM IST. For more news and updates on politics, world, sports, entertainment and lifestyle, log on to our website latestly.com).