Communist Party of India (Marxist) leader Veena George on Thursday took oath as Kerala's cabinet minister. She is all set to take over as the Kerala Health Minister of the state replacing KK Shailaja. Veena George is representing the Aranmula assembly constituency in the Pathanamthitta district of the state. 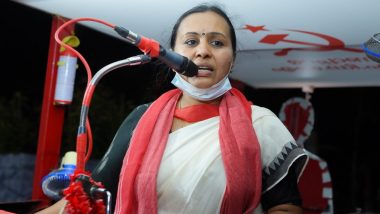 Thiruvananthapuram, May 20: Communist Party of India (Marxist) leader Veena George on Thursday took oath as Kerala's cabinet minister. Veena George is all set to take over as the Kerala Health Minister replacing KK Shailaja. George is representing the Aranmula assembly constituency in the Pathanamthitta district of the state. The Aranmula MLA is also a former journalist. She joined politics as an activist of the Student Federation of India (SFI), the student wing of CPI (M).

Who Is Veena George?

Veena George was born on August 3, 1976. She has journalism experience of more than 16 years. Before joining politics, she worked with major Malayalam news channels. The Aranmula MLA started her journalism career as a journalist trainee at Kariali TV. George pursued a post-graduation in Physics from Kerala University. KK Shailaja, Praised for COVID-19 Handling, Dropped From Pinarayi Vijayan's New Cabinet in Kerala, Netizens Express Displeasure Over Her Exclusion.

Notably, KK Shailaja, who received praise for her handling of the coronavirus outbreak in Kerala as the state's Health Minister, was dropped from Pinarayi Vijayan's new cabinet. The exclusion of Shailaja from Vijayan's cabinet came as a surprise to many. She was also lauded for her role in the state's fight against the Nipah virus.

Vijayan, who led the Left Democratic Front (LDF) to an unprecedented consecutive victory in the April 6 assembly polls, was on Thursday sworn in as the Chief Minister of Kerala for the second successive term. Governor Arif Mohammed Khan administered the oath of office to 76-year-old Vijayan in a low-key function at the Central Stadium here, which was held completely in adherence with the COVID-19 protocol.

(The above story first appeared on LatestLY on May 20, 2021 06:12 PM IST. For more news and updates on politics, world, sports, entertainment and lifestyle, log on to our website latestly.com).