We Hit Terrorists in Their Backyard After Pulwama Terror Attack: Narendra Modi

"But it needs courage. There were proofs of involvement of terror masterminds based in Pakistan. But what did India do?" he asked. 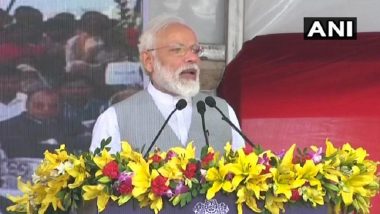 Greater Noida, March 9: Prime Minister Narendra Modi on Saturday said India hit terrorists in their backyard after the Pulwama terror attack and accused the previous Congress-led UPA government of lacking courage to take action against Pakistan-based terror groups after 26/11 Mumbai terror attack in 2008. Addressing a rally here, Modi said what his government did post-Pulwama has not been done in decades.

"We hit terrorists in their houses. The terrorists and their masters were not expecting this kind of response. The air strikes were done at 3.30 am and Pakistan lost its sleep. They tweeted at 5 a.m. and started saying that Modi has hit us," he said. Recalling the surgical strike of 2016 in the wake of terror attack at Uri, he said terror masterminds were accustomed to thinking that India would do nothing, but his government has "taught them a lesson". Pulwama Attack: PM Narendra Modi Vows to Give Befitting Reply to JeM Strike, Says 'Army Given Free Hand'.

He alleged that perception about inaction by India was due to the government that ruled India before 2014. Modi said that there was need of action after the Mumbai terror attack that killed 166 people as the world community was with India. "But it needs courage. There were proofs of involvement of terror masterminds based in Pakistan. But what did India do?" he asked.

Modi said the forces were ready for action but "Delhi was cold". He said terror cannot be fought by constraining hands of defence force. Referring to the terror incidents after the Mumbai attack, Modi said these were also linked to Pakistan but the "remote-controlled" government showed inaction.

"What did the then government do? They did not change the policy, but (changed) only home ministers. If they had shown the courage, given reply to terrorists in their language, terrorism would not have become such a big problem (for the country)," he said.

(The above story first appeared on LatestLY on Mar 09, 2019 04:37 PM IST. For more news and updates on politics, world, sports, entertainment and lifestyle, log on to our website latestly.com).