West Bengal Assembly Elections 1969: Ahead of 2021 Vidhan Sabha Polls, A Look Back at The Polling, Alliances and Results of The Previous Elections

Ahead of this year's polls, let's have a brief look at the elections held in 1969 when the United Front registered a landslide victory in West Bengal. 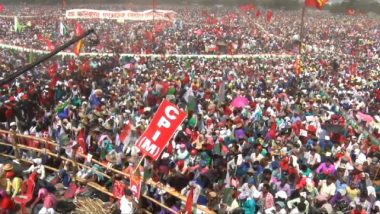 Kolkata, March 9: The assembly elections in West Bengal will be held in eight phases from March 27 to April 29. Polling will be held in eight phases on March 27, April 1, April 6, April 10, April 17, April 22, April 26 and April 29. The results will be declared on May 2. Ahead of the polls, let's have a brief look at the elections held in 1969 when the United Front registered a landslide victory in West Bengal. West Bengal Assembly Elections 2021: Prashant Kishor Tweets 'On May 2, Hold Me To My Last Tweet'.

In 1967, the United Front managed dislodge the Congress government for the first time in West Bengal. In 1969, it again won the assembly elections with nearly 50 percent votes. The coalition won 214 out of 280 seats in the state and retained power with Ajoy Mukherjee as the Chief Minister. The CPI(M) emerged as the largest party with 80 seats in its kitty. The Congress was second-largest party with 55 seats, but couldn't form the government.

Over the years, the Left and the Congress lost their grip in West Bengal. This time, the main electoral fight is between the ruling (TMC)Trinamool Congress, headed by Chief Minister Mamata Banerjee, and the Bharatiya Janata Party (BJP), which is playing the role of prime opposition in the state. The Left and Congress have joined hands against the TMC and the BJP.

(The above story first appeared on LatestLY on Mar 09, 2021 03:48 PM IST. For more news and updates on politics, world, sports, entertainment and lifestyle, log on to our website latestly.com).