Not only Murmu but the two-time MLA from Itahar in North Dinajpur resigned from the party and joined BJP after he was denied ticket this time. "I had joined BJP but I didn't work. Most of the time I was at home and now I want to join Trinamool Congress again. Hope party will forgive my mistake and give me a chance to work," Acharya said. 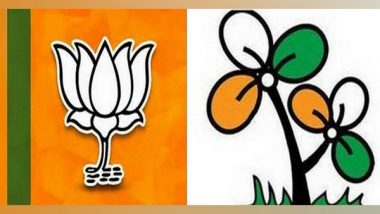 Kolkata, May 23: After Sonali Guha, more BJP leaders who left Trianmool Congress before the election, expressed their willingness to return to their previous party and former MLA Amal Acharya and Trinamool leader from Malda Shyamali Murmu are some of them. Though the party is yet to clear their stand on these turncoats but BJP already said that it would not affect the performance of the party in the state.

Sarala Murmu who was allotted ticket for Habibpur assembly constituency left the party on March and joined BJP alleging that the district leadership were not allowing her to work. Though sources in the party said that she left the party because she wanted to contest from Malda South. Murmu wrote a letter to chief minister Mamata Banerjee on Sunday expressing her willingness to join the party. However, there was no official confirmation to the letter yet from the party.

Speaking to the media Murmu said, "I was always worker of Trinamool congress and wanted to work under the leadership of our chief minister Mamata Banerjee. It was an emotional decision to go to BJP and I have realised that. There is no place to work in BJP and I want to return back to Trinamool congress". Narada Scam Case: Mamata Banerjee Reaches CBI Office After Arrest Of West Bengal Ministers Firhad Hakim And Subrata Mukherjee.

Not only Murmu but the two-time MLA from Itahar in North Dinajpur resigned from the party and joined BJP after he was denied ticket this time. "I had joined BJP but I didn't work. Most of the time I was at home and now I want to join Trinamool Congress again. Hope party will forgive my mistake and give me a chance to work," Acharya said.

The ruling Trinamool Congress, however did not make any comment on this. "There are many people who want to come back including 6 MLAs and 3 MPs. They had left the party when the party was in problem and now, they want to come back. I cannot make a comment on this because there has been no policy decision on this issue. The party will decide the future of these people," Trinamool Congress spokesperson Kunal Ghosh said.

BJP was, however, not too much worried about this exodus. "Before the election these people thought that BJP would come to power and so they joined the party and now they want to leave. Our party is a huge party and this kind of joining and leaving the party continues. So, we have nothing to say on this. If they want to leave, they can leave," state BJP president Dilip Ghosh said.

On Saturday, the turncoat Trinamool Congress leader who switched camp just before the assembly polls Sonali Guha wrote an emotional tweet to chief minister Mamata Banerjee expressing her willingness to return back to old party again.

Guha said that she had left the party out of extreme emotion and in a fit of temper but now she realised that she has made a huge mistake. In an emotional tweet to the chief minister, the former MLA of TMC wrote, "Sekhane (BJP) nijeke maniye nite parini. Mach jemon jol chara thakte pare na, temoni ami apnake chara banchte parbo na. Didi ami khomaprathri, daya kore amake khoma kore din. Apni na khoma kore ami bancho na (I could fit myself there (BJP). As a fish cannot live without water, I cannot live without you. Sister (Mamata) I beg your pardon. If you don't forgive me, I won't be able to live)".

"Apnar aanchaler tole amake tene niye baki jibonta amake apnar snehatole thakar sujog kore din (Take me under your fold and allow me to live the rest of my life under your guidance and blessing)," she had said.

(The above story first appeared on LatestLY on May 23, 2021 06:27 PM IST. For more news and updates on politics, world, sports, entertainment and lifestyle, log on to our website latestly.com).