Liquor shops in Puducherry witnessed a heavy rush after the Union Territory relaxed lockdown norms and allowed opening of these outlets from 9 a.m. to 5 p.m. 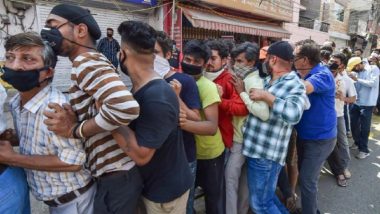 Puducherry, June 8: Liquor shops in Puducherry witnessed a heavy rush after the Union Territory relaxed lockdown norms and allowed opening of these outlets from 9 a.m. to 5 p.m.

Arrack shops are also open in the Union Territory. The liquor shops and arrack shops were closed after the government announced a partial lockdown to contain the spread of COVID-19.  Liquor Home Delivery: 'Rule Change on Liquor Policy Wrongly Interpreted, Clarifies Delhi Government', Says ‘Only L-13 Licence Holders To Deliver Alcohol Booked Through an App or a Website’

Even though the government has announced doorstep delivery of liquor to reduce the footfalls in outlets, districts like Puducherry, Karaikal, Yanam and Mahe witnessed heavy rush in the liquor shops.

Palaniswamy, a plumbing worker, told IANS, "The opening of liquor shops is a big relief. There is a heavy rush here since morning and I purchased a bottle after standing in a queue for a long time. Anyway the government has opened the liquor shops taking into consideration the fall in tax revenues as well as the requests from a cross-section of people."

Dhanraj, a businessman-based at Paloor, speaking to IANS said, "Shutting down liquor shops was a good proposition. Mahe and the surrounding areas are surviving due to the liquor business and the government, including Health, Police, and Excise departments, must coordinate and allow liquor shops to conduct business while abiding by COVID-19 protocols."

While the Puducherry alchohas allowed doorstep delivery of liquor, including arrack, the takers for this are less.

Sujith Gangadharan, a government employee at Mahe, told IANS, "After a lull of one month, when the liquor shops opened here in Mahe it was a mad rush and we could witness this from my office which is adjacent to two liquor shops. People had come from Vadakara and Thalassery in Kerala to buy liquor since morning."

Murugesan, a liquor shop employee at Karaikal town, told IANS, "There was heavy rush since morning as it has been a month since liquor outlets were shut down. People from Tamil Nadu have also come in large number to buy liquor from here as the state has not yet opened liquor outlets."

(The above story first appeared on LatestLY on Jun 08, 2021 07:30 PM IST. For more news and updates on politics, world, sports, entertainment and lifestyle, log on to our website latestly.com).