The government made it clear that TV channels can also broadcast the serial title in English apart from an Indian language. 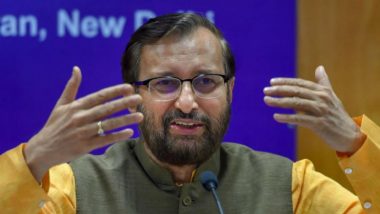 New Delhi, June 14: The Central government on Friday issued an order asking television channel to telecast titles of serials in the Indian language that they broadcast. The government made it clear that TV channels can also broadcast the serial title in English apart from an Indian language.

"With a view to enhance outreach and benefit TV viewers of the country, the Ministry has advised all private satellite TV channels to consider displaying the castings/credits/titles of Hindi and Regional languages TV serials in the respective languages also," it added.

To promote #Indian languages we are asking TV channels to also give titles in their programmes in the Indian language in which they broadcast: Union Minister @PrakashJavdekar

"In addition to an Indian language, if they want to give titles and credits in English as well, they are free to do so. So we are not restricting anything, we are actually adding the Indian languages. We are issuing such orders for cinema also," said Information and Broadcasting Minister Javadekar.

(The above story first appeared on LatestLY on Jun 14, 2019 04:29 PM IST. For more news and updates on politics, world, sports, entertainment and lifestyle, log on to our website latestly.com).