In an interesting case, the Shamli police has ordered the DNA test of an allegedly stolen buffalo that was traced by its owner in a nearby village. 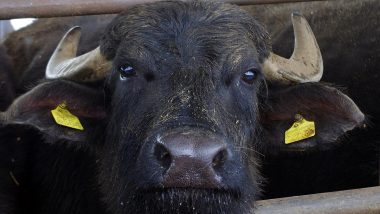 Shamli, June 6:  In an interesting case, the Shamli police has ordered the DNA test of an allegedly stolen buffalo that was traced by its owner in a nearby village.

Chandrapal Kashyap, a labourer, had complained that a three-year-old male buffalo was stolen from his cowshed on August 25, 2020. Kanpur Violence: UP Police Releases Posters of 40 Stone-Pelting Rioters; Seeks Information on WhatsApp

It was found in November 2020 in Beenpur village of Saharanpur but the new owner Satbir Singh refused to part with the animal claiming it was his.

The matter had taken a back seat during the COVID-19 pandemic.

Shamli SP, Sukriti Madhav has ordered a DNA test of both the mother buffalo (which is still with Kashyap) and the Saharanpur buffalo to ascertain the rightful owner.

Madhav said "It was really a challenge to find out the real owner. But since Kashyap claimed he had the mother, we decided to go for a DNA test."

Kashyap, meanwhile, explained how he identified the lost animal: "Like humans, animals also have distinct features. Firstly, it has a scar on its left leg. It also has a white patch at the tail end. And the third thing is its memory. When I went closer, he recognised me and tried to reach me. What else do I need to establish its identity?"

(The above story first appeared on LatestLY on Jun 06, 2022 05:21 PM IST. For more news and updates on politics, world, sports, entertainment and lifestyle, log on to our website latestly.com).