Antinatalism: Consent of a Foetus? Why Antinatalists Don’t Want You To Make Babies

Antinatalists are against procreation because one shouldn't bring a child into a world of suffering without its consent. 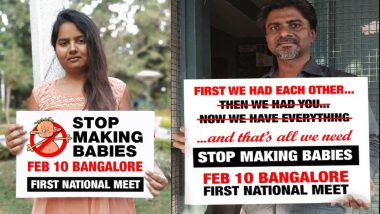 Consent has become an important word in the last few years, especially when used in the context of sex. But a group of people believe that the concept of consent should exist even outside the realm of dating, and that children should be brought into the world only with the consent. Confused? So is everyone else. Mumbai-based businessman Raphael Samuel is in the news for suing his parents. Because they never sought his consent before giving birth to him. He’s among a small tribe of people known as antinatalists who want the world to stop procreating. They believe that giving birth is akin to forcing another life to live on Earth without his or her consent.The word "antinatalism" is coined from "anti" meaning "against" and "natal" meaning "birth." The theory was first propounded by philosopher David Benatar in his book Better Never to Have Been: The Harm of Coming into Existence.

The group of people who believe in the ideology of anti-natalism are working collectively towards building a 'child-free' society some of them are even planning to sue their parents for bringing them in this world without his consent. Some of these people are putting forth their motive via placards and slogans wherein they are asking people to stop having children and violating their consent. Take a look at some pictures of people believing in anti-natalism holding placards.

However, we do not claim the authenticity of the pictures if they are morphed or whether the people in the picture share the same ideology or not.But there is a wave around the country about anti-natalism.

(The above story first appeared on LatestLY on Feb 07, 2019 07:53 PM IST. For more news and updates on politics, world, sports, entertainment and lifestyle, log on to our website latestly.com).