Dr. Fox showed his penchant for entrepreneurial skills at a young age. While still working in the service industry, Adrian managed a hair salon, along with a phone card business and a newspaper stand. 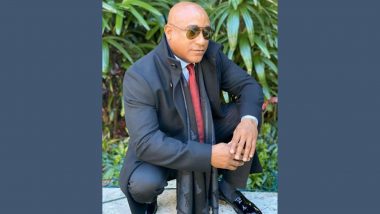 Dr. Adrian Fox, philanthropist and entrepreneur, is a native to the Bahamas working for the betterment of his people. His vast accomplishments as a businessman allow him to expand his work to that of philanthropy, and his love for his fellow countrymen and women have motivated him to empower the underserved.

Adrian Fox, accomplished entrepreneur, was born on January 12, 1969. He was educated on the Islands, attending elementary school at St. Bedes Primary School. He furthered his education at the Donald W. Davis Middle School and graduated from the R. M. Baily High School. However, during this time, the future Dr. Fox was working in the restaurant industry. He began working at Captain Nemo's during his adolescence, but he also worked at the Cafe Martinique and 5 Twins, all enterprises within the popular tourist attraction, the Atlantis resort.

Dr. Fox showed his penchant for entrepreneurial skills at a young age. While still working in the service industry, Adrian managed a hair salon, along with a phone card business and a newspaper stand. These early experiences gave him the desire to open his own enterprises, including Foxies Restaurant and Bar as well as Foxies Liquor. He eventually opened a clothing store called Obsession Designs.

The success of these fledgling businesses only served to increase Fox's desire to establish newer and even more successful organizations. He would develop and run the Island Luck, a gaming and lottery business in the Bahamas. Dr. Fox would eventually explore his options in real estate, establishing Brickell Real Estate. He would also offer his talents at ILTV and Tresor Rare Parfumerie.

Dr. Fox greatly enjoyed his personal success, but his heart felt that something was missing. He looked around himself and the community, and saw exactly what that something was. The people of his beloved Bahamian Islands were suffering around him; he knew something had to be done. He realized that his success provided him with the means to do something. He established the Fox Foundation, based on his own personal experiences of living through multiple natural disasters, including hurricanes and subsequent flooding which are common in the Bahamas. To be exact, Dr. Fox witnessed his fellow countrymen and women hurting after an ecological natural disaster in St. Vincent. It was then that he realized he could and would help the people of his beloved homeland.

Dr. Fox wrote in The Jerusalem Post: "Possessing direct experience of living through a natural disaster, I am deeply attuned to the difficulties facing the people of St. Vincent." In 2019, Dr. Fox recruited members of the Foundation to utilize private ships to provide assistance to the people of St. Vincent. These individuals went to the Abaco area, helping with evacuations and providing food and water to those in the area. They also provided generators to the people affected by the natural disaster. In addition, Dr. Fox and the Foundation enlisted donors for a GoFundMe account specifically to bring attention to the plight of those in St. Vincent, and hopefully garner donors from across the world.

When the COVID-19 pandemic swept across the world, Dr. Fox saw another important need for the people of his country. He stepped up, motivating the Bahamian people to find ways to pull themselves out of the economic slump brought on by an abrupt end to international travel. Dr. Fox states that the people of the Bahamas should not sit back and wait on the people who love the islands to provide a means of economic assistance. Rather, Dr. Fox utilized his position in the Fox Foundation to garner assistance from countries around the world, including the European Union. Dr. Fox has related that the tourism industry chiefly sustains places like the Bahamas; the outbreak of the pandemic is enough to crush the economy of such a place. However, Dr. Fox has a solution, and it's a solution in which he intends to be a proactive part.

Dr. Fox believes that the way to see an improvement to the quality of life of his fellow Bahamians is quite simple. He wants every child to get a proper education, and he wants to see young people get skills training that will make them part of a viable work force. He believes that the significant loss of tourism in the Bahamas can leave the country in a permanent economic downturn, forever disabling the region. Dr. Fox lamented recently: "In countries such as ours, (where) the employment (is) highly dependent on tourism, the philanthropic sector has a responsibility to provide innovative solutions to local problems."

Dr. Fox didn't just make these statements and sit back, waiting for someone else to step up to the plate. He has taken the bull by the horns and has put his own philanthropic organization at the forefront for putting money back into the community. Plus, he is enlisting donors from across the world to assist him in the matter. The Centre for Disaster Philanthropy has stated that billions of donations given during the pandemic were from wealthy donors. The Fox Foundation took this information and seeks to work with donors worldwide to provide support that will not only improve the quality of life of all native Islanders, but to also provide education and development specifically to the youth of the Bahamas.

Although Dr. Fox has always wanted to give back to the community, he pinpoints to Hurricane Dorian as the specific moment in which he knew he had to get the ball rolling to help his own people. Dorian hit the islands just a year before the pandemic outbreak, leaving billions of dollars worth of damage. The IMF offered a relief package in the form of financial assistance, but this would only provide a small portion of the relief needed. Not only would the island have to rebuild, but, soon, the pandemic would halt virtually all international tourism.

In October 2020, the IMF released economic growth predictions for the upcoming year. Unfortunately, the organization predicted that the tourism industry would see drastic cuts. At this time, Dr. Fox mobilized the efforts of the Fox Foundation to assist the Bahamians and the Caribbean people as well. As predicted, tourism has yet to return to pre-pandemic levels, so Dr. Adrian Fox Bahamas and other philanthropists have given assistance to help the economy of the Bahamian people and the Caribbean Islands rolling once more.

Dr. Fox is also looking at the long-range plan. He seeks not only one-time donations but ongoing donations for the people of the Caribbean as well. However, these donations are merely the beginning - Dr. Fox is working incessantly to develop a resilient educational system that will provide both an academic education and training programs for youth of the Caribbean. It is Dr. Fox's belief that a strong educational foundation will promote productivity and encourage future entrepreneurship in his native Bahamas. This is the cornerstone of the Fox Foundation's efforts - promoting educational opportunities in an ever-evolving world.

In its six years of operation, the Fox Foundation has garnered more than five million dollars in worldwide donations. There are four areas in which Dr. Fox utilizes these monies. The top priority is youth development. Dr. Fox firmly believes that the youth of the Caribbean deserve to receive training in marketable skills that they can use in various workforce situations, not simply in tourism. Dr. Fox wants to see other industries brought to the Islands, rather than seeing the entire nation rely on tourism for its economic strength. Dr. Fox ardently promotes education for all in the Caribbean Islands; he believes there is no better way to strengthen the people and economy of his homeland.

Dr. Fox also knows the importance of community building in the Caribbean, including both physical building and social building. The Fox Foundation is committed to assisting with rebuilding after natural disasters as well as working together to make the community itself a better place to live. Part of this commitment is the fourth pillar of the Foundation's goal, to provide medical treatment for all. This is especially important after a natural disaster, when scarce medical resources can run even thinner than usual.

Another area of concern for Dr. Fox is the fact that, according to the IMF, as many as ten to forty percent of the working age population of the Caribbean will choose to migrate elsewhere to live and work due to a lack of opportunities in their homeland. This is referred to as "brain drain," and it is further eating away at the economy of the Caribbean Islands. Not only does the Fox Foundation wish to stop this drain on the population, but he also wants to make the Caribbean a place where people want to live, work, and raise a family. Dr. Fox relates that if the people of the Bahamas are equipped with marketable skills they can use to feed their families, they will not leave the country to find work elsewhere.

It is Dr. Fox's firm belief that empowering the people of the Caribbean lies chiefly in educating them. He has stated that education initiatives must be "wider and more impactful." With help from philanthropists from around the world, Dr. Fox intends to see the educational needs of Caribbean children not only met, but surpassed. He wants to begin working in his native country to not only rebuild physical structures in his homeland but also to provide the native children with a proper education. With COVID-19 detrimentally affecting global travel, Dr. Fox believes that native Caribbeans hold the key to their future, one that does not totally depend upon tourism for economic stability.

Dr. Fox is also working to promote the Caribbean Islands as a sustainable area, and possibly the exporter of energy, which could greatly improve the economy of the area. Nearshore wind is a major renewable energy source, and Dr. Fox is working on ways to use this energy to build the economy of his homeland. In addition, pump storage hydro energy could be the very renewable that the country could export, making the Caribbean so much more than a tourist attraction. Finally, liquified natural gas could be used to power cruise ships coming in and out of the Islands.

Dr. Fox has led a successful life, but his heart wishes to see his fellow Bahamians successful as well. By setting an educational foundation, Dr. Fox hopes to equip future workers with marketable skills and personal success.