Last month after becoming the global house ambassadors for Louis Vuitton, BTS boys have finally walked the runway for the fashion giant on July 7 in Seoul. 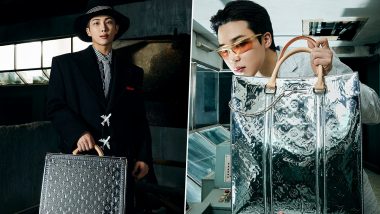 According to The Independent, the band “modelled the collection in a short film by Abloh and South Korean director Jeon Go-woon, debuting 34 new looks.” Reportedly, this menswear collection was first displayed in Paris in January 2021; however, the latest ‘spin-off’ was the continuation of Virgil Abloh’s series titled The Voyage.

Earlier, before walking the ramp, the band BTS took to their official Twitter handle to share the news with their fans. They wrote, “We are excited to be part of the upcoming #LouisVuitton show in Seoul! Purple heart this tweet to set a reminder to watch on July 7th at 7pm (KST).”

We are excited to be part of the upcoming #LouisVuitton show in Seoul!

Even the fashion giant Louis Vuitton has posted a picture on Instagram to share the news. They captioned the picture as, “#LouisVuitton Ambassador and @bts.bighitofficial member Jimin shows off a silver tote bag from the collection at @ViriglAbloh’s #LVMenFW21 fashion show in Seoul.”

Later, by taking to Instagram, they have also shared moments from the fashion film. As the band stated that the latest menswear collection “investigates the unconscious biases instilled in our collective psyche by the archaic norms of society.”

After going through the pictures, one can totally understand that the collection consisted of jackets, long overcoats, sequins and furs. BTS’ RM, Jin, SUGA, j-hope, Jimin, V and Jung Kook walked the ramp just like professional models. They looked dapper in every outfit.

(The above story first appeared on LatestLY on Jul 08, 2021 04:53 PM IST. For more news and updates on politics, world, sports, entertainment and lifestyle, log on to our website latestly.com).