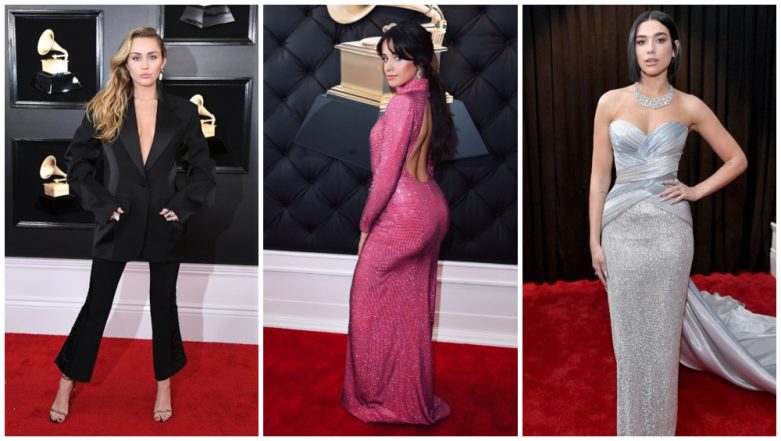 Grammy Awards are always a breath of fresh air when it comes to fashion at the red carpet. Most artists ditch the classic suited up looks for outfits that make statements. The 61st annual Grammy Awards 2019 held at the Staples Center in Los Angeles was no exception to that. Artists were seen sporting outfits that splashed across colour pallets and we saw some amazing runway creations. This time the red carpet was even special considering it was the longest ever in the Entertainment history, being 200 feet long. Here we have listed the top celebrities who definitely set the red carpet on fire. Grammy Awards 2019 LIVE UPDATES: Ariana Grande Bags Her First Grammy For 'Sweetner'

Camila Cabello shined in a glittery pink gown as she flaunted her curves. The singer was nominated for best pop solo performance (for a live version of "Havana") and best pop vocal album (for debut album Camila, though the award was won by Ariana Grande's Sweetener ahead of the ceremony kick-off).

Miley Cyrus rocked an all-black outfit at the red carpet of the 61st Annual Grammy awards. The American singing sensation was seen sporting a pantsuit which consisted of an oversized coat. With her tresses let down, Miley was seen posing on the red carpet with her dad, Billy Ray Cyrus.

She looks so damn gorgeous 💕💕💕

#Offset and #CardiB arrive on the red carpet + more photos from the #Grammys https://t.co/IppMqheRDM | 📸 @ChelseaLaurenLA pic.twitter.com/JrcdyfBUfh

Ask about drama on the red carpet and Cardi B has to be named. The rapper took her outfit a notch higher with a head-gear that made her look like an absolute queen.

Lady in red ‘bout to set it off!!! 💃💃💃 #TheGramKeys pic.twitter.com/fwldjHkbT1

The hostess for the big night, Alicia Keys stunned in a bright red gown.

As expected, the red carpet was a glamorous affair and now we'll have wait and see how the musical evening goes as some of the biggest musical legends perform at the awards. Let's see who takes the big awards home!