Fashion Nova allegedly imitated Versace’s most iconic creation ever. It is the gorgeous “jungle print” dress that Jennifer Lopez wore and graced the 2000 Grammy Awards that single-handedly inspired the Google images. 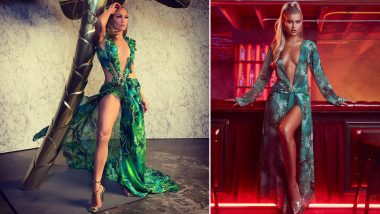 American based fashion retain company Fashion Nova has recently launched their designs for the holiday season. But the brand has been pulled into drama yet again for ripping off designs like it is nobody’s business! This time, Fashion Nova allegedly imitated Versace’s most iconic creation ever. Rings a bell? Well, yes it is the gorgeous “jungle print” dress that Jennifer Lopez wore and graced the 2000 Grammy Awards that single-handedly inspired the Google images. While it sounds unbelievable, it is not really new for the fashion retailer to make news for copying designs of popular brands. As the famous print debuted Fashion Nova’s website for the holiday season, the Italian fashion house, Versace has filed a lawsuit.

JLo's 2000 Grammys look was adored by everyone. The green jungle-inspired dress that included a deep-V neckline and sheer material that flattered the actress’s desirable figure blew everybody's mind. Her outfit went viral even before viral was a thing! It received so much love that Versace brought it back during its Spring 2020 show during Milan Fashion Week with JLo modelling in it. With such hype, we wonder how even Fashion Nova could decide to go on copying and to put it out for sale. By the way, if you want to it, the copied version of the dress is priced at 69.99 USD.

According to media reports, on November 26, the Italian fashion house sued Fashion Nova over a knock-off version of Lopez’s iconic plunging green gown. And not just that, TMZ reports several other pieces of clothing that the company recreated. It is suing for all the Fashion Nova’s profits off Versace replicas. Fashion Nova has reportedly been sued at least eight times for similar kind of alleged offences, including one from Adidas. Earlier this year, Kim Kardashian wore a vintage Thierry Mugler cutout gown at the 5th Annual Hollywood Beauty Awards, and Fashion Nova sold a replica of the same too.

(The above story first appeared on LatestLY on Nov 27, 2019 10:17 AM IST. For more news and updates on politics, world, sports, entertainment and lifestyle, log on to our website latestly.com).