Priyanka Chopra Jonas at Met Gala: Sartorial Choices of the Fashionista That Make Us Look Forward to Her 2019 Appearance 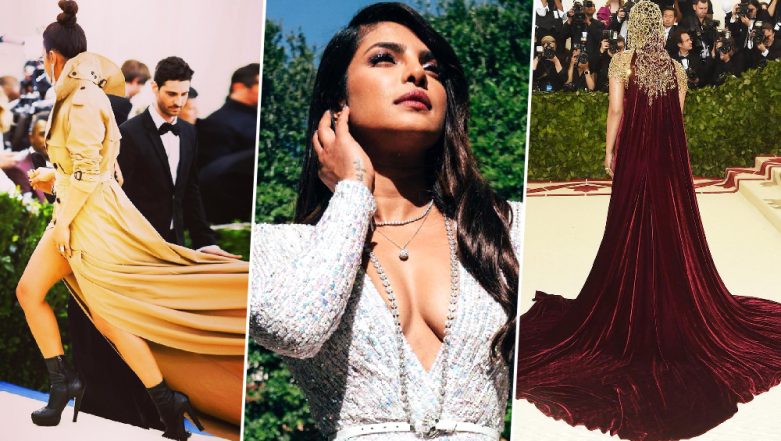 The Met Gala 2019 is happening on May 6 at the The Metropolitan Museum of Art in New York. The celebs who would be a part of the committee has been revealed. It was just recently when Priyanka announced through her Instagram handle that she and her husband Nick Jonas are a part of the Met Gala Host Committee. Fans are looking forward to see this lovely pair making an appearance on the red carpet but more than that all are just waiting to see the actress’ sartorial choice for this year. We all know that PeeCee can carry any outfit with absolute ease and utmost grace, and her last two appearances at the Met Gala is proof. Nick Jonas' Thoughts On Attending MET Gala 2019 With Wife Priyanka Chopra Makes Him The Sweetest Husband!

Priyanka Chopra Jonas' appearance in Ralph Lauren’s trench coat gown is unforgettable. That year is special not just because of her famous outfit, but that was the first time when she met Nick Jonas. Post the gala, Priyanka attended the after party but it was sans the trail. Pictures of the diva flooded on the internet but the netizens made numerous memes over it. But that really didn’t make any difference to her. And she came up with another glamorous outfit for Met Gala 2018. Priyanka Chopra Jonas Looks Ravishing in a White Dress Alongside Nick Jonas at the 2019 BBMAs – See Pics.

Priyanka Chopra Jonas loves to take style statements to another level that one can’t even think of. For the second time she dressed up in a Ralph Lauren Couture, a burgundy velvet gown with a cape. Such risk only PeeCee will take and rule the red carpet. The outfit had Swarovski crystals and other intricate details. Vogue had reported stating that the global icon’s look took 250 hours to be embroidered. Priyanka Chopra and Nick Jonas Were on a Date During their Met Gala 2017 Appearance? The Singer Answers.

And one from Priyanka and Nick's wedding - The Ralph Lauren connection

We just can’t wait to see what Priyanka Chopra Jonas would be donning at Met Gala 2019. Will the actress again don a Ralph Lauren outfit? The actress’ bridal gown was also designed by the ace American fashion designer. We are eagerly looking forward to Priyanka and Nick Jonas’ 2019 appearance at the Met Gala.