The actress was also in the news when she had accused Bollywood producer-director Vipul Shah of making sexual advances on a pretext of giving a role in his last release, Namaste England. 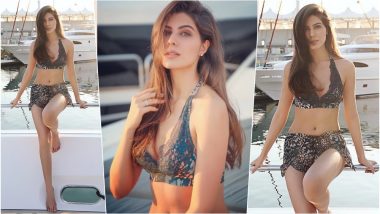 Out of the many reasons to wait for the second season of Sacred Games is Elnaaz Norouzi. The gorgeous Iranian actress has made this wait even tougher by posting a very hot picture of hers on Instagram. Elnaaz, 26, is looking smoking hot in a printed bikini, which despite not being the tiniest from her wardrobe is the raciest. Everything about this bikini shoot photo is perfect, be it Elnaaz Norouzi’s shiny, luscious hair or her hot navel. She is truly gifted with her hot bod giving men sleepless nights and making ladies envious of her. Who Is Elnaaz Norouzi Aka Zoya Mirza of Sacred Games? See Hot Pictures of Iranian Actress Whose Character in Netflix Original Is Relatable to Katrina Kaif!

Sharing bikini pictures from her latest bold photo shoot that took place at Abu Dhabi in UAR, Elnaaz writes, “Feeling a little warmer in this cold... Good Morning ☀️ .” The Sacred Games actress is enjoying the winter sun as she stands near the edge of a yacht, giving her fans a good view of her svelte figure. We love how the Maan Jao Naa actress is rocking this not-so-skimpy bikini and how. It is not your typical teenie-weenie swimsuit worn by celebs that can never be addressed as ‘relatable.’ But this outfit choice looks hot yet safe if you’re not much comfortable with the skin show. #MeToo: 'He Touched My Butt, and Dragged Me Towards Himself,' Elnaaz Norouzi Accuses Vipul Amrit Shah of Sexual Harassment.

Speaking of Elnaaz in Sacred Games, the young actress portrays the role of a huge movie star but with a dark past in the Netflix India original web series. Her portrayal of Zoya Mirza in Sacred Games has been much appreciated by both critics and fans. Her character is one of the few to survive the first season of the show and fans look forward to seeing more of Elnaaz’s Zoya.

The actress was also in the news when she had accused Bollywood producer-director Vipul Shah of making sexual advances on a pretext of giving a role in his last release, Namaste England. Elnaaz had made the shocking revelation in the ongoing #MeToo in India campaign. Her fans would hope she never has to face such ordeals in her future in Bollywood.

(The above story first appeared on LatestLY on Jan 08, 2019 05:22 PM IST. For more news and updates on politics, world, sports, entertainment and lifestyle, log on to our website latestly.com).