Sonam Kapoor Slays in Floral Coordinated Crop Top and Skirt as She Celebrates Her 36th Birthday in London; See PHOTOS

Sonam Kapoor celebrated her 36th birthday on June 9, 2021. And now, she took to her Instagram handle to share a few stunning pictures of her in a gorgeous floral ensemble and she is looking extremely beautiful in the same. 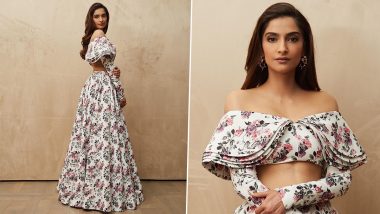 Sonam Kapoor is one of the most sought-after actresses in the Bollywood film industry.  Apart from her acting skills in several hit films, she is also known for her unique and trendy sartorial choices. The Delhi 6 actress is a style icon for many. Time and again, she has made us believe that she is a fashionista in the true sense. When it comes to fashion and style, nobody can beat Sonam. She always gives us major fashion goals by posting her stunning pictures in gorgeous ensembles on Instagram.

This time, she did the same as she posted some gorgeous pictures of her from one of her photoshoots. In the pictures, the diva can be seen wearing Emilia Wickstead’s gorgeous floral crop top paired with a matching skirt. She wore the same ensemble loaded with pink and red rose prints on her 36th birthday celebration in London on June 9, 2021. To style her overall look, Sonam opted for minimal jewellery and kept her beautiful tresses open. While sharing the pictures, she wrote, "Florals? For Spring. Groundbreaking.

Miranda Priestly." Soon after she posted the pictures, several started complimenting her look in the comment section. Actress Sonakshi Sinha dropped a few heart-eyed emojis while Sonam's mother Sunita Kapoor dropped a heart emojis.  One of her fans wrote, "Pretty Sonam, while another one wrote, "Gorgeous."

Earlier, Sonam shared a few beautiful pictures of her wherein she can be seen donning a red and white combination tulle ensemble. Take a look:

On the work front, Sonam Kapoor will next be seen in Shome Makhija’s crime thriller film Blind. Reportedly, it is a remake of a Korean movie of the same name. The movie will also feature Lillete Dubey, Purab Kohli, and Vinay Pathak in key roles.

(The above story first appeared on LatestLY on Jun 11, 2021 01:24 PM IST. For more news and updates on politics, world, sports, entertainment and lifestyle, log on to our website latestly.com).