With sister Rhea Kapoor as her own stylist, the Veere Di Wedding actress has made some remarkable outings in the past and there's no one in Bollywood who does fashion as well as her. 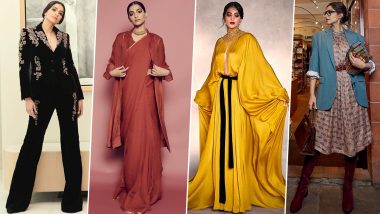 Sonam K Ahuja celebrates her birthday on June 9. And when the day belongs to a fashionista, you celebrate it in 'style'. For someone who got us acquainted with the term 'fashionista', Sonam deserves all the loud cheer in this world. While she's missing from the Bollywood scenario for the longest of time, Sonam often keeps her fan updated with her sartorial choices. She stirs up a fashion storm every time she decides to step out and we find ourselves ogling at her pictures, one at a time. Sonam Kapoor Decks Up in Anamika Khanna Couture and It's a Union You Should Celebrate (View Pics).

Sonam's love for haute couture cannot be matched. From strutting in style on the red carpet at the Cannes film festival to promoting her new releases in style, Sonam and her wardrobe are like a dream come true for any girl out there. With sister Rhea Kapoor as her own stylist, the Veere Di Wedding actress has made some remarkable outings in the past and there's no one in  Bollywood who does fashion as well as her.

Sonam isn't someone who would follow any trends. She believes in being a trendsetter instead. Over the years, she has mastered the art of couture dressing picking some elaborate designs from different designer houses. While Anamika Khanna continues to have her heart, Elie Saab will forever have her attention. A pioneer of fashion in Bollywood, she strives to excel in this department and has a flair for everything that's nice and elegant. Sonam Kapoor Shining Like a 'Solid Gold' in This Stephane Rolland Dress (View Pics).

As the stunner gets ready to celebrate her big day, let's go back in time and revisit some of her best fashion outings.

In Bhaane and Victoria Beckham

Sonam is currently gearing up to star in Blind, a crime thriller that's backed by Sujoy Ghosh. The movie also stars Purab Kohli, Vinay Pathak and Lillette Dubey in key roles. She recently finished shooting for the movie and is looking forward to its release. Post which, the actress is yet to announce her next outing. And we hope she does that on her birthday. On that note, here's wishing her an amazing year ahead.

(The above story first appeared on LatestLY on Jun 09, 2021 08:45 AM IST. For more news and updates on politics, world, sports, entertainment and lifestyle, log on to our website latestly.com).