Earlier, Sunny has posted a picture dressed in traditional Kerala wear. In the Instagram image, she is seen wearing a short dhoti and blouse with a deep neckline. "In love with God's own country - #Kerala," Sunny wrote as the caption. 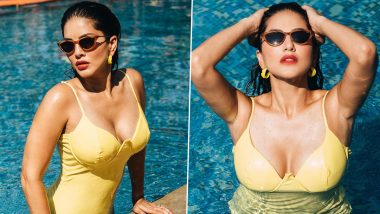 Sunny Leone might be busy with work but she never misses a chance to enjoy herself. We often see her playing pranks, dancing, spending time with her family or simply chilling by the pool. A few days back the actress had shared a few pictures in a blue bikini while she lazed around in the pool and now once again the actress is back in the water to have some relaxing time. The actress posted a series of pictures in a sexy monokini that sure is a 'Monday Distraction'. Sunny Leone's 'Monolith' Mascara Gets Stolen by Aliens! Watch Funny Video to Find Out How It Was Taken to Space.

The actress is seen wearing a yellow monokini in these Instagram pictures. She is posing by the pool while she flaunts her sexy curves. The actress added a pair of chic sunnies to go with her monokini look. She added yellow hoops and red lipstick to finish this hot look. Her hair are slightly wet, making her look even more attracting. The pictures went viral in no time and Sunny's post has already garnered one million views in just a few hours of its release.

Earlier, Sunny has posted a picture dressed in traditional Kerala wear. In the Instagram image, she is seen wearing a short dhoti and blouse with a deep neckline. "In love with God's own country - #Kerala," Sunny wrote as the caption. The images came after she posted a slo-mo video last Thursday where she is seen dressed in a mustard jumpsuit and posing for the camera as she slowly falls into the pool. Sunny Leone or Sara Ali Khan, Who’s Pretty Marathi Mulgi Look Set Your Heart Racing? Views Pics and Videos.

Workwise, Sunny is currently in Kerala shooting for the latest season of MTV reality show Splitsvilla. She was last seen Sunny Leone was last seen on web series Bullets which released on MXPlayer on January 8 starred Karishma Tanna alongside her. Last month, she kickstarted the first schedule of her first fictional web show Anamika as well. The series is said to be a 'gun-fu' action thriller directed by Vikram Bhatt.

(The above story first appeared on LatestLY on Feb 22, 2021 04:23 PM IST. For more news and updates on politics, world, sports, entertainment and lifestyle, log on to our website latestly.com).