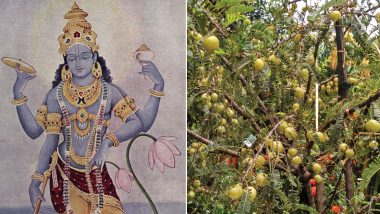 Amalaki Ekadashi or Amalaka Ekadashi is a holy day which is observed by Hindus in the worship of the amla or amalaka tree and in turn of Lord Vishnu. There is a belief that Lord Vishnu resides in this tree. It is celebrated on the 11th day of the month of Phagun of the traditional Hindu lunar calendar. It is thus also called the Phalguna Shukla Paksha Ekadashi. Amalaki Ekadashi 2019 will be celebrated on March 17, Sunday this year. It is an important religious day which falls between the festivals of Maha Shivratri and Holi. Many devotees observe a day-long fast or the Amalaki Vrat on this day and break it only on the sunrise of the next day. The practice is called as Ekadashi Parana. Let us know more about the history and significance of celebrating the Amalaki Ekadashi and the Amalaki Vrat. Holashtak 2019 Dates: Why These Eight Days Before Holi Are Considered Inauspicious? Know Its Significance.

Date and Tithi of Amalaki Ekadashi

History and Significance of Amalaki Ekadashi

According to a mythological legend, King Chitrasena used to follow the vrat of Amalaka Ekadashi. Once while he went hunting in the forests, he was attacked by the demons. He fell unconscious and when we woke up, he found all the demons were killed. A divine power had emerged from him which killed all the demons. An Akashvani was announced that he was saved due to the observance of the Ekadashi vrata. Another legend states that those who performed true devotion of Lord Vishnu were blessed with riches by the Lord.

On this day, people worship the tree of amla which is the Indian gooseberry. There is a belief in Hinduism that God or the omnipresent spirit resides in everything. On the day of Amalaka Ekadashi, Lord Vishnu is said to reside in this amla tree. It is also said that his wife, Goddess Lakshmi also resides in this tree. So this particular tree is worshipped.

Thus, devotees worship the amla tree to gain good health and wealth. Amalaki Ekadashi fasting is thus said to be a fruitful one for all Lord Vishnu devotees. It is a very auspicious day for all the believers of Lord Vishnu and keeping a fast on this day is one way of pleasing him.

(The above story first appeared on LatestLY on Mar 16, 2019 03:06 PM IST. For more news and updates on politics, world, sports, entertainment and lifestyle, log on to our website latestly.com).