European Day of Languages 2020: Date, History and Significance of The Day to Promote Indigenous languages in Europe 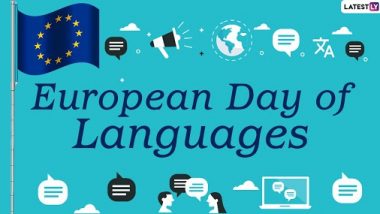 As per to an estimate, there are over 225 indigenous languages in Europe, excluding those which have arrived on the continent through migration. The Council of Europe proclaimed the European Day of Languages on 6 December 2001, at the end of the European Year of Languages. In terms of foreign language studies are concerned, English is currently the most popular foreign language in Europe, followed by German, French, Italian, Russian and Spanish.

Aim of celebrating this auspicious day:

The European Day of Languages is celebrated to alert the public to the importance of language learning. Also, through this, the diversification of languages learned in order to increase plurilingualism and intercultural understanding are focussed. Apart from this, the Council of Europe promotes the rich linguistic and cultural diversity of Europe, and encourage lifelong language learning in and out of school.

(The above story first appeared on LatestLY on Sep 26, 2020 08:30 AM IST. For more news and updates on politics, world, sports, entertainment and lifestyle, log on to our website latestly.com).