It is that time of the year! The time to celebrate all the Hindu new years. In Maharashtra, the harvest festival is celebrated as Gudi Padwa. According to the panchang, the festival of Gudi Padwa 2021 will be celebrated on Tuesday, April 13, on the Pratipada date of the Shukla Paksha of Chaitra month. 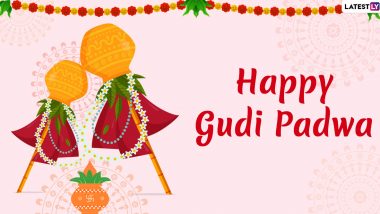 What is Gudi Padwa?

The day of Gudi Padwa marks the celebration of the Maharashtrian New Year. In the South Indian states, this day is celebrated as harvest day, which marks the beginning of the spring season. The day is celebrated all over India but with different names, cultural beliefs and celebrations. On this day various rituals take place which begins at sunrise and continues throughout the day.

The festival of Gudi Padwa is celebrated in Maharashtra as well as Goa and Kerala. Here it is known as ‘Samvatsar Padvo’. In Karnataka, the festival is known as the Yugadi festival. It is also called Ugadi in Andhra Pradesh and Telangana, ‘Navreh’ in Kashmir, Sajibu Nongma Panda or Meitei Cheiraoba in Manipur.

The story of Gudi Padwa

According to the legend, on this day Lord Rama returned to Ayodhya after defeating Lankapit. At the same time, it is also believed that on this day Brahmaji created the universe, and on this day life started on earth. That is why there is also the law of special worship of Brahmaji on this day.

Gudi Padwa has special significance in Maharashtra. Sweet chapatis are also made in homes on this day, which is called Puran Poli. Puran Poli is made by mixing jaggery, salt, neem flowers, tamarind and raw mangoes. There is also a tradition of eating neem at Gudi Padwa. Neem is considered capable of curing many types of diseases. Lord Surya Dev is worshipped at Gudi Padwa. Along with this, Lord Rama, Maa Durga and Hanuman Ji are also worshipped.

According to the scriptures and Hindu mythology, the day of Gudi Padwa is celebrated because it symbolizes the auspicious day when Lord Brahma created this universe. Apart from this, it is also a symbol of the victory when Lord Rama returned to Ayodhya after defeating Ravana. What is the legend of Gudi Padwa? Gudi Padwa is an occasion that marks the victory of the Shakas over the Hunas. According to the story behind Gudi Padwa and the Shalivahana calendar, the Huns were defeated by King Shalivahana on this day. Legend states that it is the day when Brahma created the universe and thus on the day of Gudi Padwa, the Satya Yuga began.

(The above story first appeared on LatestLY on Apr 07, 2021 07:31 PM IST. For more news and updates on politics, world, sports, entertainment and lifestyle, log on to our website latestly.com).