Kalpana Chawla 59th Birth Anniversary: From Asteroid 51826 Being Named After Her to ‘Kalpana Chawla Award’, Everything You Want to Know About the First Indian-Origin Woman to Go to Space

As we celebrate the 59th birth anniversary of Kalpana Chawla on March 17th this year, we at LatestLY, bring some of the most intriguing facts and details about the Indian-origin American astronaut. 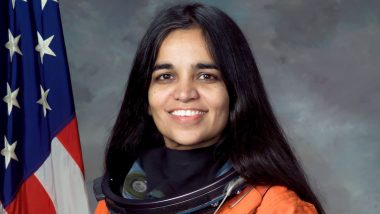 Who doesn’t remember the ever-charming smile in an orange NASA spacesuit? Well, if you distinctly remember, you’d see a young beaming face of a woman named Kalpana Chawla. There are so many interesting things that people want to know about Kalpana Chawla. As we celebrate the 59th birth anniversary of Kalpana Chawla on March 17th this year, we at LatestLY, bring some of the most intriguing facts and details about the Indian-origin American astronaut.

1.Kalpana Chawla is the first Indian-origin woman to go to space.

2. Kalpana Chawla’s first flight to space was Space Shuttle Columbia in 1997, where her role was of a mission specialist and robotic arm operator.

3. After her untimely death in 2003, Kalpana Chawla was awarded the Congressional Space Medal of Honor posthumously.

4. Kalpana Chawla was born in Karnal, Haryana, on March 17, 1962. However, it is a little-known fact that her official birth date was changed to July 1, 1961, to her become eligible for matriculation.

5. Kalpana Chawla began working at NASA Ames Research Center in 1988, where she did Computational Fluid Dynamics research on vertical and/or short take-off and landing (V/STOL) concepts. The rest they say is history.

6. Kalpana Chawla was quite talented at a very young age. She had a Certified Flight Instructor rating for gliders and aeroplanes. She also held Commercial Flight licenses for single and multi-engine aeroplanes, gliders, and seaplanes.

7. Do you want to know Kalpana Chawla’s first words during her debut space mission? She said, “You are just your intelligence.” It was a bitter-sweet experience for her as the Spartan satellite that she had deployed, malfunctioned.

8. It was Kalpana Chawla’s second space mission in 2001, i.e., the STS-107 mission, which turned out to be disastrous. When Kalpana Chawla was returning from space aboard Space Shuttle Columbia, the internal wing structure got destroyed and it broke further apart, resulting in a disaster.

9. You will be delighted to know that Asteroid 51826 is named after Kalpana Chawla; it is one of 7 asteroids that was named after the crew members of Space Shuttle Columbia.

10. Another thing that will surprise you is that NASA has a supercomputer dedicated to the name of Kalpana Chawla.

Kalpana Chawla isn’t just the first Indian woman to go on a space mission. She happens to be a role model to millions of young girls around the country. It would be only fitting to pay rich tributes to her unmatched legacy by sharing these amazing facts about Kalpana Chawla with your loved ones.

(The above story first appeared on LatestLY on Mar 17, 2021 08:40 AM IST. For more news and updates on politics, world, sports, entertainment and lifestyle, log on to our website latestly.com).