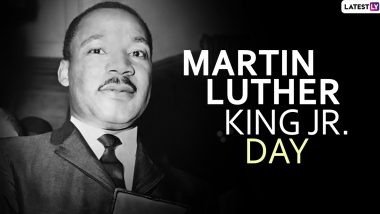 Every January, the third Monday of the month is marked as Martin Luther King Jr. Day. It is a federal holiday in America to mark the birthday of the activist who was most known for his involvement in the Civil Rights Movement from 1955. Martin Luther King Jr's birthday is on January 15 but the third Monday of January is observed as MLK Day of Service. This day essentially highlights the legacy of Martin Luther King Jr and focuses on civil rights. It is a day that celebrates the life and achievements of the leader, remembering his campaigns on ending racial segregation. On this day, we tell you a bit of the history and significance of this day. Popular Sayings That Throw Light on The Importance of Citizens' Rights.

Martin Luther King Jr was born on January 15, 1929 in Atlanta. During his growing up years, he experienced a lot of racial prejudices. He began to hate the racial segregation which was undertaken in schools and colleges. He thus grew up to become a social activist who led the civil rights movement in the United States from the mid-1950s. He started nonviolent activism and protested against discrimination. Inspiring Quotes Reminding People What an 'Ideal Democracy' Shall Stand For.

The idea of Martin Luther King Jr. Day as a holiday was promoted by labour unions in contract negotiations. They introduced a bill in Congress to make King's birthday a national holiday. After all the initial conflicts to get it passed, the holiday was observed for the first time on January 20, 1986.  It was officially observed in all 50 states for the first time in the year 2000. The observance names differ in states, with some referring to it as Civil Rights Day.

This day has been observed as a national Martin Luther King Day of Service. So the idea is to encourage the citizens to volunteer for service in honour of the King. Several universities and organizations from around the US participate to celebrate this day. Volunteers are told to spare time and make a difference. It is also observed at workplaces, among nonprofit organizations, factories, manufacturers.

The day has been observed in not just the US but also countries like Canada, Israel, Japan and the Netherlands. This day is thus a way to look back at the great work and contribution of Martin Luther King Jr, encourage others to be inspired by his work, and focus on everyone's civil rights.

(The above story first appeared on LatestLY on Jan 20, 2020 01:56 PM IST. For more news and updates on politics, world, sports, entertainment and lifestyle, log on to our website latestly.com).