Matsya Jayanti 2021 Date and Significance: All About The Festival That Celebrates The Birth of Lord Matsya

Matsya Jayanti celebrates the birth anniversary of Lord Matsya who is believed to be the first avatar of Lord Vishnu in the form of Fish, during the Satya Yuga. According to Hindu mythology, the ‘Matsya Avatar’ is a one-horned fish that appeared during the ‘Mahapralay’. 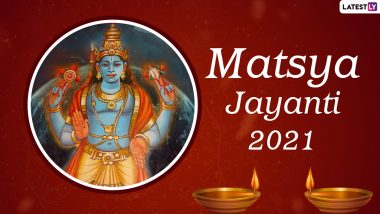 Matsya Jayanti celebrates the birth anniversary of Lord Matsya who is believed to be the first avatar of Lord Vishnu in the form of Fish, during the Satya Yuga. According to Hindu mythology, the ‘Matsya Avatar’ is a one-horned fish that appeared during the ‘Mahapralay’. As per the Hindu calendar, this auspicious festival is celebrated in the Chaitra month during Shukla Paksha on Tritya (third day). This festival occurs between the auspicious ‘Chaitra Navratri’ (the 9-day period designated for Goddess Durga) and coincides with the grand ‘Gangaur' festivities. As we prepare to celebrate Matsya Jayanti 2021, here is everything you need to know about this festival. Happy Gangaur Teej 2021 Wishes And Greetings: WhatsApp Messages, Quotes, HD Images And Wallpapers to Share on The Occasion of Gauri Puja.

Matsya Jayanti this year will be celebrated on April 15 this year. According to the Gregorian calendar, the day falls either in March or April.

How is Matsya Jayanti Celebrated?

On the auspicious day of Matsya Jayanti, devotees wake up early in the morning, take a holy bath and observe fast to please Lord Vishnu. The fast on Matsya Jayanti commences from the night before this festival and the one who fasts refrains from eating or drinking even a sip of water. The fast continues till the sunrise day after this festival and devotees break their fast only after worshipping Lord Vishnu. It is believed that devotees are rewarded for staying awake all night and chanting Vedic mantras. Reciting the ‘Matsya Purana’ and ‘Vishnu Sahasranaam’ is also very auspicious. On this day, one must also donate food and clothes among the poor and needy, it is highly beneficial. The devotees get rid of all past and present sins by worshipping Lord Vishnu.

Matsya Jayanti is an important day for Hindu devotees. On this day, special arrangements and pujas are performed in Lord Vishnu temples all over the country. As per the Hindu legends, Matsya Avatar was the first of the ten incarnations ‘Dashavatar’ of Sri Hari Vishnu. In the religious history of Hinduism, there is nothing mentioned about the rituals, traditions, and customs to be followed in worshipping the Matsya Avatar. Yet on the day of Matsya Jayanti, Hindu devotees worship this form of Vishnu with immense devotion and dedication. The festival is celebrated in a grand manner in Lord Vishnu temples all across the country.

Unfortunately, this year due to the ongoing coronavirus pandemic, the celebration of Matsya Jayanti will be restricted to indoor. We wish you all a very Happy Matsya Jayanti 2021.

(The above story first appeared on LatestLY on Apr 14, 2021 06:09 PM IST. For more news and updates on politics, world, sports, entertainment and lifestyle, log on to our website latestly.com).