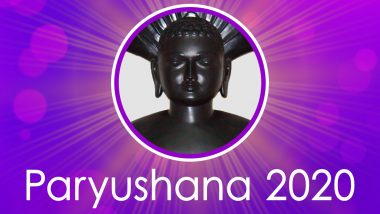 Paryushana Mahaparva or Paryushana is one of the most important observances in the Jain community. Paryishana 2020 will begin on August 15 and end on August 22. People of the Jain community and those who fall under the subsects of Jains- Shvetambars and Digambars also observe the day. Shvetambars follow it for a period of eight days and refer to it as Paryushana or Paryushana Parva. Digambar refer to the observance as Daslakshan Parva and is followed by ten days. Daslakshan Parva 2020 begins on August 23 and ends on September 1. Saṃvatsarī is the last day of Paryushana Shwetambar sect of Jainism which falls in the month of Bhadrapada according to Jainism. It is observed to connect oneself to one's own soul and a break from the daily routine of people. Believers fast for about a week and the celebration of Samvatsari, the day of forgiveness.

The meaning of Paryushan is "abiding" or "coming together." People of the Jain community take a vow of study and fasting. On the last day of Paryushana, people request forgiveness from others if they have caused any offence to them in the past year. They ask for forgiveness by saying "Micchami Dukkadam" to others, which means, "If I have offended you in any way, knowingly or unknowingly, in thought, word or action, then I seek your forgiveness."

Paryushan has been rooted in cultures centuries ago when people followed the agrarian lifestyle. After monsoon and harvests, people take a break from the fieldwork. So it is said that the Sadhus/Sadhvis would take a break to focus on themselves.

During Paryushan celebrations, people reflect on their habits and behaviour in the past year. Jains fast, meditate seek guidance to improve on themselves. Along with following a strict fast, people study scriptures and religious books. The Digambaras recite the ten chapters of sacred Jain text Tattvartha Sutra on the day of the fasts. During Paryushan Parva people follow self-discipline and penance.

(The above story first appeared on LatestLY on Aug 13, 2020 06:58 PM IST. For more news and updates on politics, world, sports, entertainment and lifestyle, log on to our website latestly.com).